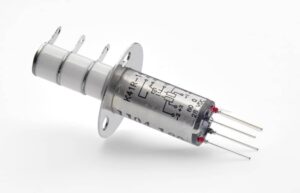 TE Connectivity has confirmed that its KILOVAC high-voltage relay has been integrated into the unmanned BepiColombo spacecraft, which is set to fly by the planet Mercury on October 1. BepiColombo is a joint effort by the European Space Agency and the Japan Aerospace Exploration Agency, and this first flyby is part of a mission to investigate and gain a deeper understanding of Mercury.

The science mission involves two planetary orbiters, the Mercury Planetary Orbiter and the Mercury Magnetospheric Orbiter. Both are carried from Earth to Mercury orbit by the Mercury Transfer Module, a space-tug equipped with a high-power electric propulsion system that utilizes TE’s rugged KILOVAC K41R high voltage relay. These relays have been used in space applications for more than 30 years, since the first mission with lunar landing equipment in the 1970s. Today, they are used throughout the International Space Station, on NASA’s Curiosity Rover on Mars, as well as extensively in space satellites.

The KILOVAC K41R high-voltage relay uses a vacuum dielectric and measures just 2.5 inches in length with a weight of 1 ounce. It has a mechanical life of 1 million cycles and a fast-operating speed of 6 milliseconds, making it a highly reliable solution for space applications. The high-voltage relay plays a crucial role in the power distribution of the low and high voltage power required by the electric propulsion used to control the spacecraft’s orientation, direction and speed.

The historic BepiColombo mission is named in honour of the Italian mathematician and engineer, Giuseppe (Bepi) Colombo and is scheduled to complete a total of six flyby events before arriving at the planet by Dec. 5, 2025, when it will become only the third mission to date to visit Mercury.

Karl Kitts, senior manager, advanced systems and architecture in TE’s Aerospace, Defense & Marine Division, commented: “The KILOVAC relays have a long history of proven reliability in space missions and applications. The extensive testing process built a high degree of confidence in the relay’s suitability for the application and, for many engineers who have specified relays over the years, the KILOVAC relay is synonymous with rugged reliability in the most demanding environments.”

Peter Kohlmeier, program manager for TE’s Aerospace, Defense and Marine Division, noted: “It’s the ability of these relays to perform in the extreme conditions of the space environment while handling high voltages that make them particularly suitable for missions like BepiColombo. Performance, reliability and safety in harsh environments are incredibly important priorities for our space industry partners, and TE has the engineering expertise to align with these priorities.”