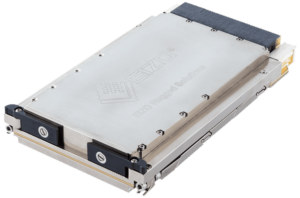 EIZO Rugged Solutions has launched the Condor GR4-RTX3000, a 3U VPX video capture and GPGPU processing card using MXM technology based on the NVIDIA Turing architecture and the NVIDIA RTX platform. The new card is ideal for a range of UAV (unmanned aerial vehicle) applications such as signals intelligence (SIGINT), electronic warfare (EW), and intelligence, surveillance and reconnaissance (ISR).

The card can be integrated into a High Performance Embedded Computing Systems (HPEC) for the capture of raw video data and other metadata from up to four sensors, for activities such as image enhancement, image analysis, video stitching, remote sensing, and target acquisition and tracking, all with extremely low latency. It also supports SDI VANC KLV metadata insertion and extraction, making it ideal for sensor processing applications involving low latency video capture/display.

The card is designed to operate in harsh environments and is tested to MIL-STD-810 standards. It is available with level 4 conduction cooling with thermally efficient heatsink technology and rear I/O.