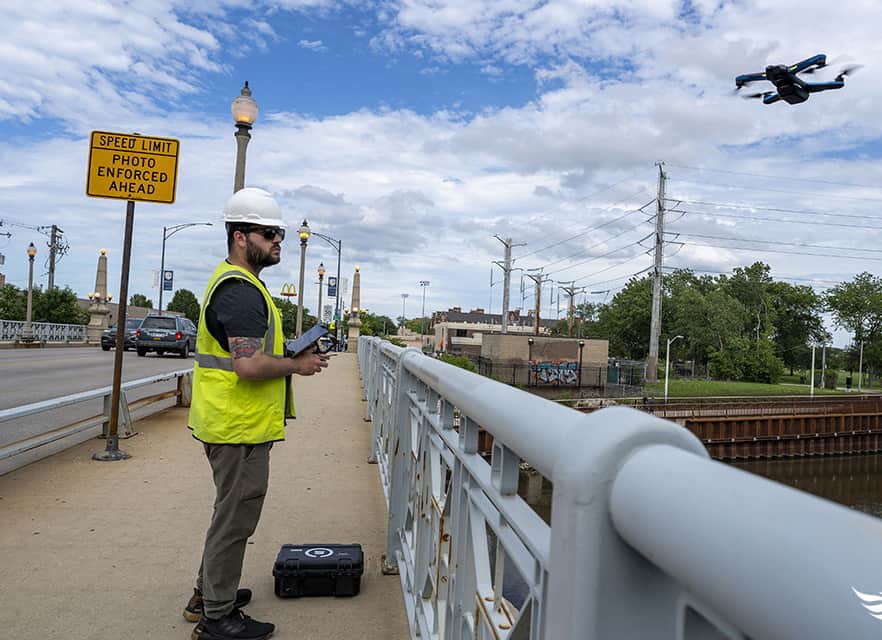 Helios Visions, a provider of drone-based inspection services, has become the first company in Chicago to receive a Beyond Visual Line-of-Sight (BVLOS) Waiver from the Federal Aviation Administration (FAA). The Part 107.31 Waiver provides the proper authorization for BVLOS drone operations and has been specifically assigned to Helios Visions for the inspection of bridge sites. The company is one of 38 UAS (unmanned aerial systems) service providers throughout the United States that have received this highly-coveted waiver designation.

Prior to the use of drones, bridge inspections required people to make dangerous climbs of the sides of bridges or use expensive trucks. Helios Visions uses Skydio drones and the Skydio Autonomy Enterprise Foundation AI software to undertake its bridge inspections. With the impending passage of the new Federal Infrastructure Bill, Helios Visions is well-positioned to offer its services to clients throughout the United States in a safe and cost-effective manner.

Jenn Player, Director of Regulatory Affairs at Skydio, said: “We are thrilled to see our autonomous flight technology being used for safe and efficient inspection of critical infrastructure. As more and more teams adopt autonomous flight, we are excited to partner with our forward-thinking customers to keep unlocking the airspace from the ground up.”

Calvin Gin, Co-Founder and CFO of Helios Visions, added: “We are excited to add the BVLOS waiver to our roster of other waivers including: Part 107.39 (flying over people) and Part 107.29 waiver (the ability to operate a drone at night), so we can continue to expand our offerings of safe, innovative, and efficient infrastructure inspection capabilities for clients and partners such as T2D2, an Ai-based damage detection SaaS platform affiliated with Thornton Tomasetti.”