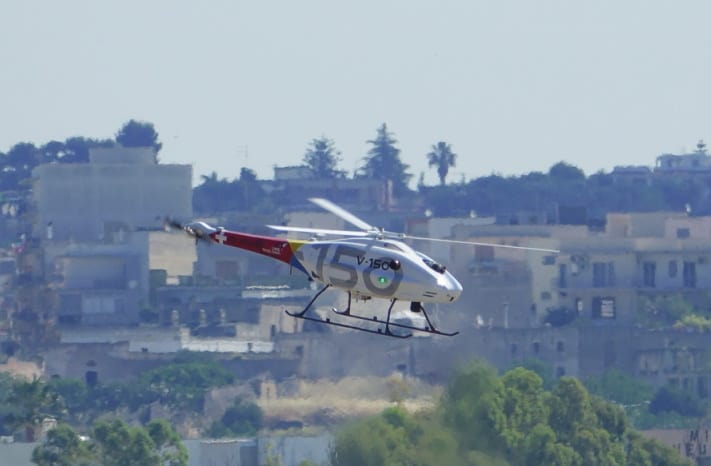 UMS Skeldar’s V-150 helicopter UAV (unmanned aerial vehicle) has been used as a test platform for the ECARO (Egnos Civil Aviation Roadmap) project, which aims to facilitate adoption of the European EGNOS and Galileo GNSS for all civil aviation applications with aircraft including fixed-wing and rotorcraft drones.

The V-150 was used to test satellite procedures that would allow similar platforms to be integrated into an airport environment, and to demonstrate the benefits of using the European GNSS systems. The trial was carried out at Grottaglie airport in Italy, with tests based on the flight clearance process as set up by ENAC (the Italian Civil Aviation Authority) in accordance with new European regulations.

The ECARO test campaign demonstrated that EGNOS and Galileo), in addition to GPS, are capable of ensuring that drones can perform safe satellite-based approach procedures, a capability required to integrate unmanned aircraft into controlled airspace. The results of the project will contribute to defining the roadmap for ENAC’s advanced air mobility, and will support the development of a national experimental research centre for urban air mobility.

To monitor GNSS signal quality, Planetek Italia has also tested a radio-frequency spectrum monitoring system at airports, which could improve the safety and security of UAS operations.

Another part of the ECARO project involves the planning and validation of GNSS routes for low-altitude helicopter rescue flights. For this, RIFIS (Repositionable IFP Flight Inspection System), a mobile platform developed by ENAV (the Italian air navigation service provider) that records and validates trajectories and flight standards, was used. The first validations have already been performed by ENAV personnel with the support of pilots from Airgreen Helicopters and Leonardo Helicopters.

More Information Find out more about this article and explore the capabilities of UMS SKELDAR...
View Profile Send Inquiry Visit Website
Share this article:
Subscribe to the UST eBrief Get the latest unmanned developments and technology news direct to your inbox once a week. Great articles, zero spam and completely free!