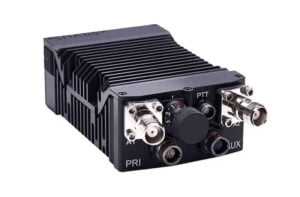 The MN-MIMO technology in the Silvus 4200 and 4400 series radios provides tactically secure data and video communications for military, law enforcement and broadcast applications. Silvus radios can transmit high-speed data and HD video over long distances with up to 8 Watts of native output power, with the effective performance of a 32-Watt radio thanks to Silvus’ unique TX Eigen Beamforming technology.

When combined, the Silvus 4200 and 4400 radios and the USaS LEAP system provide unmatched persistent aerial mobile networked communications and surveillance capabilities in rugged, rapidly changing environments. Deploying a StreamCaster radio 400 feet or more above an operating environment allows LEAP to address many of the limiting factors of wireless technology, including line of sight limitations and interference. The systems can also be expanded to form an aerial communications mesh network to cover a larger urban or rural area.

Kasey Cooper, Silvus Technologies Director of Unmanned Systems, commented: “Collaborating with industry-leading, like-minded organizations is crucial to our mission of delivering longrange, mobile and non-line-of-sight communications with unrivaled performance. Enabling USaS’s platform with our MN-MIMO technology allows us to deliver unmatched range, multi-mission capability, robustness and throughput in even the harshest, most challenging environments.”