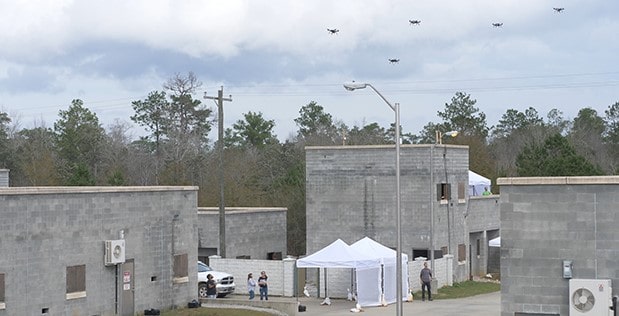 DARPA has announced that it has performed its third field experiment within its OFFensive Swarm-Enabled Tactics (OFFSET) program, which aims to develop the capability for swarms of up to 250 autonomous vehicles to collaborate in providing critical information and situational awareness to small military ground units in constrained urban environments.

In this experiment, swarms of autonomous UAVs (unmanned aerial vehicles) and UGVs (unmanned ground vehicles) were deployed to demonstrate a raid in an urban area, and were programmed to seek multiple simulated items of interest located in the buildings at the Combined Arms Collective Training Facility (CACTF) at the Camp Shelby Joint Forces Training Center in Mississippi. These items were represented by AprilTag 2D bar codes, and served as items of interest requiring further investigation or hazards to avoid or render safe during an initial intelligence-gathering phase of a mission.

The swarm replayed information from the tags to human operators, who employed various swarm tactics to isolate and secure the buildings containing the items of interest. Subswarms of autonomous vehicles were also deployed to maintain situational awareness and continue observation of the surrounding environment.

During this field experiment, Swarm Sprinters Charles River Analytics, Case Western University, and Northwestern University demonstrated the ability to integrate novel interactions and interface modalities for enhanced human-swarm teaming, which allows the human operator to use interactions such as gestures or haptic touch to direct the swarm. Carnegie Mellon University and Soar Technology incorporated their developments in operational swarm tactics, such as the capability to search and map a building or automate resource allocation.

Timothy Chung, the OFFSET program manager in DARPA’s Tactical Technology Office (TTO), commented: “It has been fascinating to watch the Swarm Sprinters, who may not have been previously exposed to realistic operational settings, begin to understand why it’s so difficult to operate in dense, urban environments. The Swarm Sprinters brought a number of novel technologies they have developed over the last 6-9 months and successfully integrated and tested their developments on physical platforms in real-world environments, which was exciting to see.”