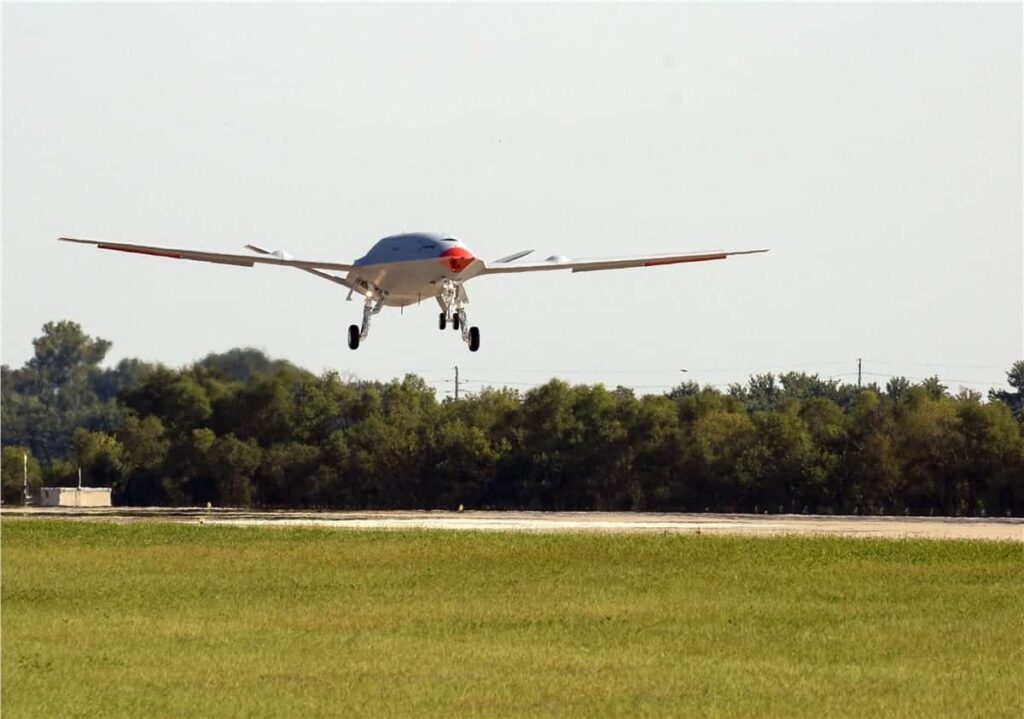 Boeing has announced that it has successfully completed the first test flight of the U.S. Navy’s MQ-25 unmanned aerial refueler. The test UAV (unmanned aerial vehicle), designated T1, undertook autonomous taxi and takeoff and then a two-hour flight from MidAmerica St. Louis Airport in Mascoutah, Illinois, and was directed by Boeing test pilots from a ground control station.

The MQ-25 will provide the Navy with a carrier-based unmanned aerial refueling capability, thus allowing reassignment of the combat strike fighters currently performing the tanking role to more suited positions. The T1 test aircraft is a predecessor to the next stage engineering development model (EDM) aircraft, and is being used for initial learning and discovery in order to meet the goals of the U.S. Navy’s accelerated acquisition program. It recently received an experimental airworthiness certificate from the FAA, verifying that the air vehicle meets the agency’s requirements for safe flight.

“Seeing MQ-25 in the sky is a testament to our Boeing and Navy team working the technology, systems and processes that are helping get MQ-25 to the carrier,” said Boeing MQ-25 Program Director Dave Bujold. “This aircraft and its flight test program ensures we’re delivering the MQ-25 to the carrier fleet with the safety, reliability and capability the U.S. Navy needs to conduct its vital mission.”

“Today’s flight is an exciting and significant milestone for our program and the Navy,” said the Navy’s Unmanned Carrier Aviation (PMA-268) Program Manager Capt. Chad Reed. “The flight of this test asset two years before our first MQ-25 arrives represents the first big step in a series of early learning opportunities that are helping us progress toward delivery of a game-changing capability for the carrier air wing and strike group commanders.”