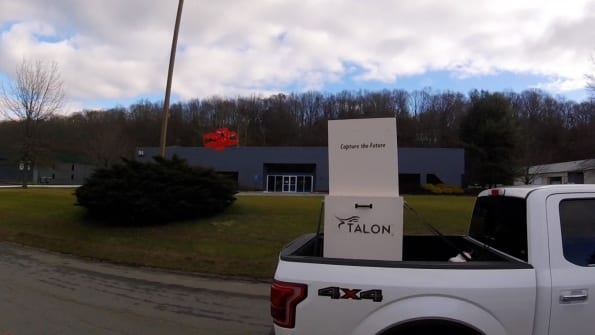 Target Arm has announced that it has officially unveiled v2.5 of its Talon Universal Launch and Recovery (ULaR) platform at the AUVSI Xponential Show in Chicago. The Talon system enables drone package delivery to and from trucks, or any moving platform, while moving, at speeds over 65 mph.

Talon v2.5 encompasses all past capabilities and already incorporates many new innovations, to include computer controls and programmability, full pop-up technology, minimized airflow disturbances with a wide-open breech and a pre-production aircraft-grade aluminum infrastructure. These technologies allow Talon to launch and recovery virtually any rotary wing or fixed wing Unmanned Aerial Vehicle (UAV)/drone from another moving platform. While Talon is initially designed for UAVs and airborne drones, the very same technology is applicable to maritime and space operations.

Talon v2.5, as the pre-production testbed, will integrate autonomous navigation systems next, allowing autonomous UAV/drone launches and recoveries for a wide range of Use Cases, including, but not limited to, package delivery and military combat operations.

Jeff McChesney, CEO & Founder, commented: “We’re really proud of Talon v2.5. Everything we’ve been innovating on is coming together into a compact, highly capable platform. Talon is unbeliebably nimble. We’ve designed it as a modular system, so we can scale the size up or down, to accommodate varying Use Cases and customers’ needs. In addition, since Talon is self-contained, it can be integrated into a truck for pop-up operations out the top for package delivery, or it can be bolted onto any moving vehicle, including boats, trains, semi-trailers, tanks, Humvees, and especially Stryker APCs.”