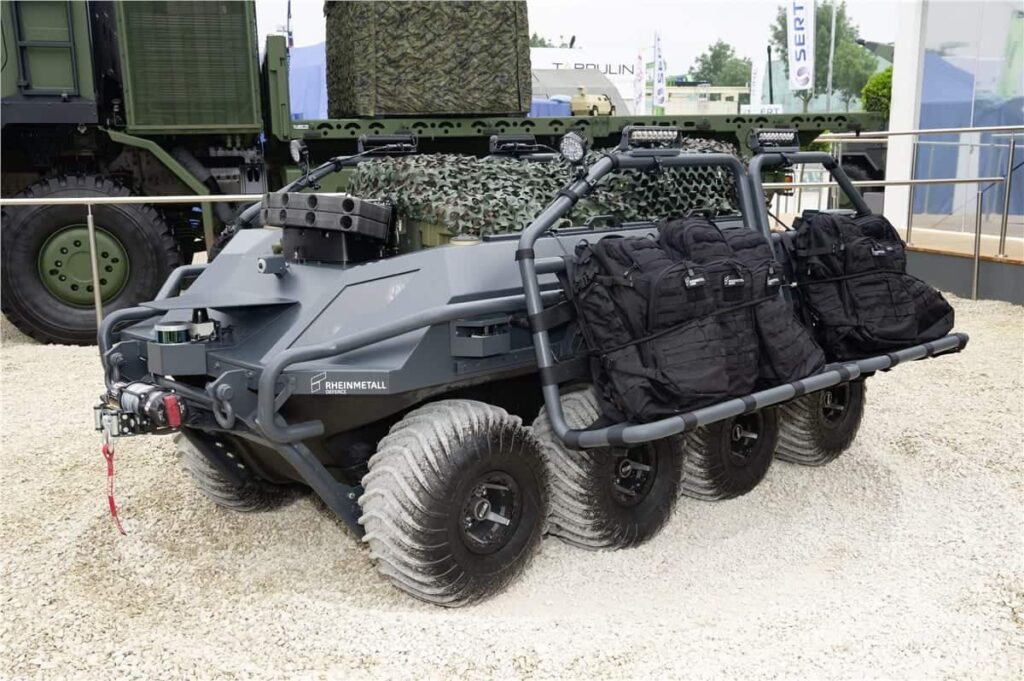 Rheinmetall has announced that its multi-mission “Mission Master” UGV (unmanned ground vehicle) has taken part in ELROB (European Land-Robot Trial), Europe’s largest exhibition for military ground robotics, for the first time. The Mission Master took on a number of competing teams, and the cargo version of this versatile vehicle performed well in the “Mule” category.

In all, six teams took part in this competition category. Mules are essentially automated pack animals – autonomous transport vehicles capable of carrying heavy loads and equipment. They had to handle two scenarios. The teams each had thirty minutes to cover a 1,400 m-long route with their mule. During the first run, Rheinmetall put in a good performance, and following the second, achieved a final score of 3,151 points, twice as many as the robotic vehicle that took second place (1,547 points), and far ahead of the one that came in third (167 points).

The cargo version of the Mission Master was previously exhibited to a large group of defence specialists for the first time at Eurosatory 2018. Rheinmetall developed this variant to reduce the combat load carried by troops in the field, contributing to faster movement and greater operational efficiency. Rheinmetall’s new robotic vehicle can operate in hazardous, difficult-to-reach terrain, in turn contributing to the survivability and protection of troops deployed in harm’s way.

Moreover, the Mission Master can be networked with advanced soldier systems such as Future Soldier – Expanded System, Gladius 2.0 or Argus. In Rheinmetall’s “System Infanterie”, the Mission Master serves as a force multiplier for infantry sections or squads equipped with Rheinmetall’s Future Soldier – Expanded System technology. Fully networked with dismounted combat troops, it takes a weight off the soldiers’ shoulders, and also relieves the pressure on military leaders.

The Rheinmetall Mission Master can be quickly configured for a multitude of different missions thanks to modular, easy-to-install build-ons. Its mission capabilities include logistics, surveillance, force protection, evacuation of wounded personnel, firefighting and CBRN reconnaissance. It can also serve as a radio relay station.