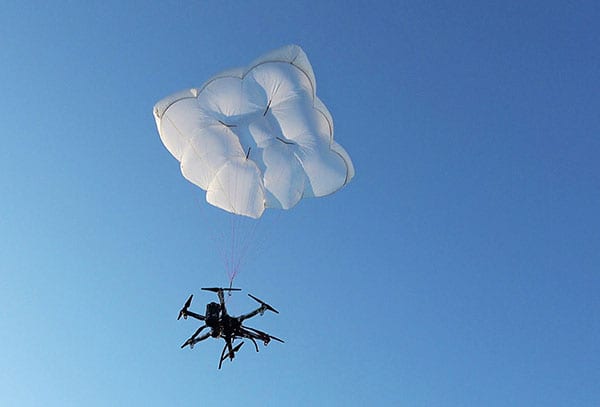 Drone Rescue, a developer of parachute rescue systems for unmanned aerial vehicles (UAVs), has announced the launch of its latest systems, the DRS-5 and DRS-10.

The DRS-5 parachute rescue system is designed for multicopters with a total weight of up to 8 kg. The system consists of a carbon cage in which the parachute is stored, as well as the associated electronics. These electronics, including the sensors, monitor the flight status of a drone, independent of the flight controller. A sophisticated algorithm merges this sensor data, through which an automatic crash detection can be realized. In an emergency the pilot no longer needs to react and press an eject button, which is often not possible due to e.g. a failure of the radio link. The algorithm reacts faster than the pilot, ejecting the parachute itself. All flight data and movements are recorded in a Black Box. In an emergency these can be read out at the request of the customer and made available to insurance companies or authorities.

“Our goal is to ensure, that even in an emergency Beyond Visual Line of Sight (BVLOS), the drone can be safely intercepted. With our parachute system that is always possible, due to the electronics that are completely separate and independent of the flight controller. In addition, our system has the advantage that it manages completely without explosive, pyrotechnical solutions. Consequently we have a system that is considerably lighter, and functions even in a worst case scenario,” elaborated Andreas Ploier, CEO and co-founder of Drone Rescue Systems GmbH.

The reliability of the system has been verified in extensive tests by Joanneum Aeronautics in Graz. In the framework of the tests 100 flights were conducted, during which the parachute system was ejected. Half of the flights were conducted with a DJI F550 weighing 1.6 kg. The rest of the tests were performed with the 3.8 kg Vulture, which was developed by Joanneum. In both cases the DRS-5 was attached to the side of the main body of the drone. In each of the tests the parachute was ejected at a height of 30 m. Every test was documented. Furthermore, the data were saved both in the flight controller as well as in the DRS-5 sensor system. After every 10th test the parachute system was subjected to a visual examination and checked for possible damage or wear.

“After conclusion of the tests it can be recorded, that all 100 flights were successfully completed,” said Ploier. “In every test the multicopter landed safely. Thereby, the kinetic energy was significantly below the limit of 79 J. Therefore all requirements specified by the European Aviation Safety Agency (EASA) were observed.”

Drone Rescue has also developed the structurally identical DRS-10, which is designed for multicopters with a total weight between 5 and 20 kg. “The DRS-10 system functions exactly the same as the DRS-5 and falls back on the same components. These are constructed identically, just oriented for a higher payload. The functioning method of both parachute systems is identical,” stated Ploier.