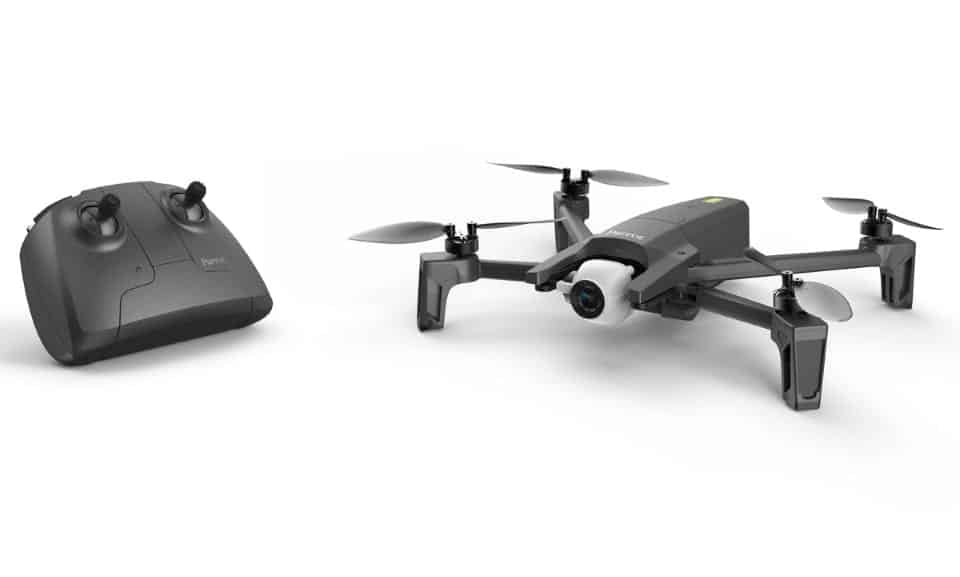 Parrot has announced the launch of ANAFI, the company’s next-generation portable drone equipped with a 4K HDR camera. Parrot has taken into account user feedback when designing the new drone to meet four essential needs: image quality, flight performance, foldability and ease of use of software and piloting.

The optics specially developed for ANAFI can withstand temperatures from 14°F to 104°F. ANAFI uses a latest-generation Sony IMX230 sensor and an Ambarella video processor to produce 4K HDR (30fps) and 21MP photos.

ANAFI’s camera is mounted on a gimbal, stabilized on 3 axes, that combines high-tech mechanical and digital stabilizations, and makes it possible to take photos and videos previously impossible to achieve with a drone of this category thanks to a vertical tilt of -90° to + 90°.

ANAFI is equipped with a lossless zoom of 1.4x in 4K and 2.8x in full HD (1080p). It is also possible to zoom 3x in digital zoom. Photo and video experts and professionals can access and modify settings to adjust resolution, photo format, shutter speed, white balance, exposure value and rendering.

The FreeFlight 6 application offers two manual control modes: Film and Sport. In Sport mode, ANAFI achieves speed peaks at 33 mph and withstands winds of 31 mph. Users can customize settings such as the incline of the drone, its rotation speed, the speed of the camera tilt, etc.

The ANAFI battery is a smart polymer lithium battery optimized to obtain the best power density in a small volume and a high rate of discharge, which allows ANAFI to achieve a 25-minute flight time. The ANAFI battery continuously monitors its charge level (regardless of the temperature and aging of the cell). During a flight, ANAFI evaluates the load level and returns to its take-off position.

The ANAFI battery has an integrated charger, compatible with the latest USB standard (USB-C) and can thus be charged via a phone charger, powerbank or laptop. It adapts to the power source, and the charge is faster when it is attached to a powerful charger. The ANAFI battery has a hibernation mode to protect its internal chemistry.

In addition, each foot of ANAFI is equipped with a dual-band antenna (2.4GHz & 5GHz) to ensure an optimal connection with the remote-control Parrot Skycontroller 3, regardless of the orientation of the drone. This omnidirectional transmission system uses Wi-Fi compliant protocols developed by Parrot.

ANAFI constantly monitors its Wi-Fi environment in order to switch to another channel when the one it uses is too crowded. This guarantees optimal spectrum utilization performance and allows ANAFI to fly up to 2.48 miles.

ANAFI is an 11.2 ounce ultra-compact, robust and foldable drone. Its four arms fold and unfold in less than three seconds. In addition, the remote control is extremely portable as the Parrot Skycontroller 3 unfolds in 1 second and automatically connects to ANAFI. Thanks to a unique assembly of carbon fiber filled with hollow glass microbeads, ANAFI is the lightest drone in its class at only 11.2 ounces, all without compromising its robustness and performance.

The FreeFlight 6 application has been developed for ANAFI and offers a modern and intuitive interface. The main features are accessible directly from the home page. The flight interface adapts to all users. Beginners have access to automatic control modes, such as SmartDronies or CineShots; professional photographers can select or customize camera settings. ANAFI offers automatic control modes: Smart Dronies, Cameraman mode and Follow Me, which use a neural network to reevaluate the target track for each image, with a focus on the shape recognition tracking system.

The FreeFlight 6 application and the Skycontroller3 long-range remote control have been jointly developed. The interaction between the two allows users to control the movement of the gimbal and the zoom with two dedicated keys and change the settings directly on the smartphone screen.