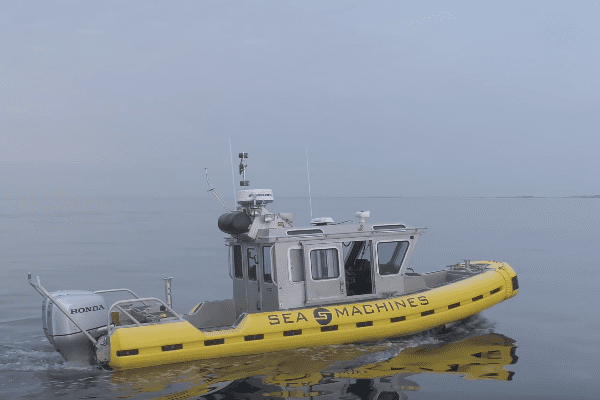 Sea Machines Robotics has announced the availability of the Sea Machines 300, an Autonomous Control System for commercial marine vessels. The company claims that the Sea Machines 300 is the world’s first industrial-grade control system that is standardized for work boats. The technology provides an immediate upgrade in vessel operations by enabling remote and autonomous control of conventional boats. The system features two command modes:

Direct Remote Command – remote joystick control of a boat with a 1-kilometer range, giving an operator the flexibility of not being confined to a vessel during operations, and boosting productivity and safety of many traditional marine tasks.

Autonomous Command – computer control which pilots a boat in preplanned or routine long duration missions with real-time self-awareness to keep the vessel on course and away from obstacles, while giving increased capability, predictability and safety.

“The Sea Machines 300 opens a new world of on-water operations providing multi-fold increases in workboat safety, efficiency, and productivity. Sea Machines technology gives companies the ability to get ahead of the marine technology curve”, said Sea Machines CEO Michael G. Johnson. “We are making autonomous & remote command a standardized product that soon will be as commonly deployed as radar or chart plotter systems.”

The Sea Machines 300 is built on marine industrial Siemens components and computers. It interfaces with vessel instruments and systems and is ready to integrate with an array of propulsion configurations. The system takes data from typical navigation sensors for real-time awareness and perception, including DGPS, AIS, and radar. All autonomy system components are mounted in a marine IP67-rated electrical enclosure.

The system is supplied with a user interface, called Sea Machines TALOS, which provides computer controlled autonomy options, or direct joystick control. TALOS can also control multiple vessels from a single station. In autonomy mode, the user can select from programmable commands such as planned waypoint tracking/grids and collaborative navigation with other vessels, all while incorporating multiobjective decision making. The Sea Machines 300 features embedded collision avoidance algorithms and abides by parts of IMO’s COLREGs navigation rules.

The Sea Machines 300 allows an on-board crew to focus on other operations like back-deck tasks, as well as providing the ability to operate a vessel in minimally-manned or unmanned configurations. An operator can now command a boat from a remote location with the visibility of vessel-born video and radar feed and has the ability to remotely control onboard payloads such as survey sonars, winches, cranes, and davits. The Sea Machines 300 provides an immediate upgrade to traditional workboat tasks such as bathymetric surveying, seismic support, spill operations, dredging, aquaculture, surveillance, area marking, and escort.

The release of the product follows 18 months of inshore and offshore testing activities. Additionally, the Sea Machines system has been deployed by pilot customers using this technology to upgrade their conventional operations.