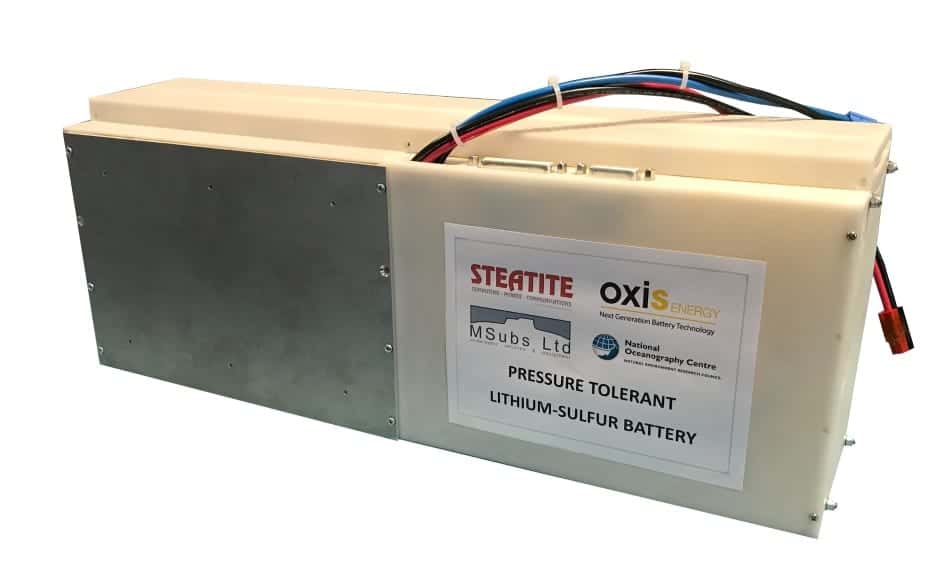 OXIS Energy has announced that in conjunction with technology firm Steatite, underwater equipment developer MSubs and the UK’s National Oceanography Centre (NOC), it has developed a pressure-tolerant Lithium Sulfur (LiS) battery that is capable of powering autonomous vehicles to ocean depths of over 6,000 metres.

Due to the neutral buoyancy of the cells and battery, buoyancy foam can be reduced in the vehicle, saving cost, weight and volume.

MSubs has integrated the battery to power a test ROV (Remotely Operated Underwater Vehicle) supplied by Deepbots AS named “Sperre Subfighter 7500”. These tests were performed on site at Sperre AS, Nottoden, Norway.

Dr RooholIah Torabi, project manager for marine autonomous systems at OXIS, said: “It has been a great pleasure for OXIS to work with Steatite, NOC and MSUBS. The consortium members had special and complementary skills that contributed to the success of the project. We hit all of our ambitious targets to fabricate and test a customised battery using Li-S cells and its demonstration in a real environment. It’s an impressive achievement for the consortium to develop a pressure tolerant battery which can generate new market opportunities for marine applications. We are also very grateful to Innovate UK and DSTL for funding the project.”

Paul Edwards, Divisional Director of Steatite Batteries, added, “The project has provided a number of challenges which have all been overcome though the hard work and determination of the consortium members. With valuable domain expertise and test resource provided by our academic partners at the NOC, through to successful sea trials and product integration by MSubs, the group can be proud of the world class achievements and capabilities it has delivered. The programme has generated considerable interest within the marine community, where the benefits of a lightweight pressure tolerant battery and improved safety offered by Lithium Sulfur cells are realized as a significant game changing technology. As the OXIS chemistry continues to mature and improve in terms of Gravimetric energy, we will see greater gains in battery pack performance. The Steatite Battery Management System and battery pack design enables a broad range of applications, and we are now looking toward the next phase which will see our battery packs successfully deployed in long term marine autonomous applications.“

OXIS Energy Ltd is involved in the design, development and now the move towards commercial production of Lithium Sulfur cells for battery systems. With 35 patent families, OXIS has been granted 108 patents with 110 pending. OXIS has demonstrable empirical data justifying its claim on the inherent safety of its battery technology.