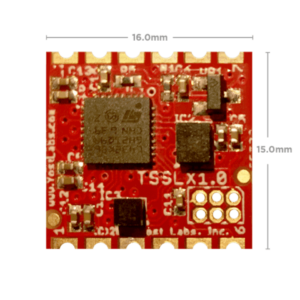 Offering high-precision, high-reliability and low-cost, the 3-Space Sensor™ LX AHRS uses triaxial gyroscope, accelerometer and compass sensors, along with a barometric pressure sensor, in conjunction with advanced on-board filtering and processing algorithms to determine orientation relative to an absolute reference orientation in real-time. It is Yost Labs’ smallest, fastest, most affordable sensor to date.

The new LX AHRS can reach sensor orientation outputs at up to 1750 Hz while automatically reducing the effects of sensor noise and sensor error. This ultra-fast filter update rate is due to the sophisticated engineering of Yost Labs’ proprietary sensor fusion algorithm, QGRAD2™ which is over 10 times more efficient than existing Kalman filter algorithms.

Measuring 16x15x1.7 mm, the re-engineered 3-Space Sensor™ is 2.2 times smaller than the previous model and weighs only 0.9 grams. Drawing just 22mA @ 5v, it is also over twice as energy efficient as the original embedded sensor.

This model also features advanced on-board magnetometer auto-calibration which allows the sensor to quickly adapt to changing magnetic environments. This breakthrough in automation increases ease of use with faster set up and more accurate results. Application for the 3-Space Sensor™ LX include robotics, motion capture, unmanned navigation, virtual reality and immersive simulation, and more.

An additional highlight of the sensors will be support for pedestrian tracking by computing and storing an estimated motion path of a walking individual carrying or wearing the sensor. With this, the Yost Labs team has solved the significant challenge of tracking where a person is as they walk around in an environment where GPS is not available.