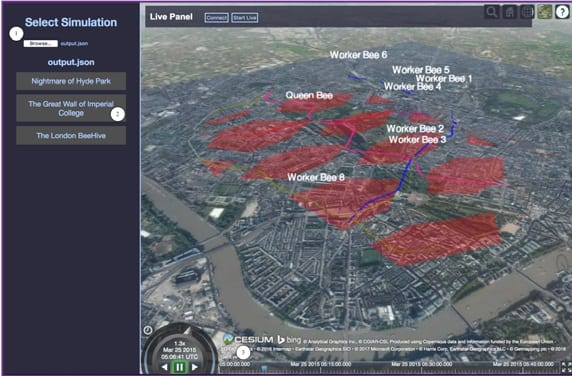 How to successfully integrate manned and unmanned aviation into our skies safely is widely considered to be one of the factors limiting the transformative potential of civilian drone technology, and proving how this can be achieved while meeting rigorous aviation safety standards is a critical concern.

Around the world, drones are typically restricted to flight within the visual line-of-sight of their human pilot. While the uses of drones are many and varied, this restriction does severely hamper the transformative potential of this technology, limiting its usefulness. Although many drones are themselves capable of basic ‘automatic’ flight, the lack of any traffic coordination, awareness of other – manned and unmanned – airspace users or even proper data about the regulatory environment are all hindrances to having these restrictions lifted.

Traditional methods of air traffic control do not scale well to the unmanned traffic environment (and, for the most part, would be inappropriate) and there are many complex challenges to be overcome in developing an automated substitute. “That’s why this study, led by Altitude Angel and Imperial College London, has such a profound relevance to the development of the drone industry on a global scale”, said Richard Parker, Founder & CEO of Altitude Angel.

Building on Altitude Angel’s existing technology and under the guidance of its engineers, 14 undergraduate Computing students from Imperial College London split into two teams and went head-to-head to find the most effective algorithms for enabling drones to go about their business while avoiding each other, other air traffic and hazards.

The students then had to verify their algorithms against a series of tough simulation scenarios powered by Altitude Angel’s drone cloud platform, designed to be representative of possible “real-world” scenarios. This means, in practice, that the teams had to cater for both risks known at pre-flight as well as risks that become apparent during a flight; factors which are often omitted in other emerging UTM systems.

Using just a modest amount of computing power in Altitude Angel’s cloud, the students proved that over 1,000 drones could successfully co-exist with both manned and unmanned aviation in a dense, 1 km² area, avoiding no-fly zones and crossing paths at a safe distance without human intervention, achieving a 0% rate of conflict.

Professor William J Knottenbelt, Department of Computing, said: “This project demonstrates why it is so mutually beneficial for computer science students to interact with industry. In this instance, our students were empowered to achieve to the best of their potential by Altitude Angel, who provided valuable domain expertise, test infrastructure and regular feedback, and Microsoft, who provided cloud-based compute resources. It also shows the importance of being open to ideas from other disciplines: in this case the physics-based notion of treating the drones as charged particles which naturally repel one another turned out to be a critical element of the solution.”

An executive overview of the full research white paper will be available from Altitude Angel shortly. An overview case study can be downloaded here.