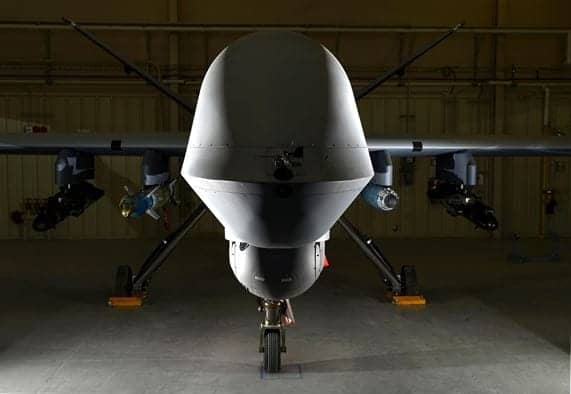 The U.S. Air Force has announced that the latest version of the MQ-9 Reaper UAS (unmanned aircraft system), the Block 5 variant, has flown its first successful combat mission in support of Operation Inherent Resolve.

The aircrew flew a sortie of more than 16 hours with a full payload of weapons including GBU-38 Joint Direct Attack Munitions and AGM-114 Hellfire missiles. During the mission, the crew employed one GBU-38 and two Hellfires while providing hours of armed reconnaissance for supported ground forces.

The Block 5 MQ-9 is equipped with improved electrical and communications systems which provides better software and hardware upgrades for future operations providing dominant persistent attack and reconnaissance to joint force commanders. The aircraft must also be flown with the new Block 30 cockpit that required different training for the aircrews.

“(This strike) was no different than employing weapons off the previous version of the MQ-9,” said Maj. Chad, a 432nd WG pilot. “Our job is to provide the ground force commanders with effective, persistent attack capability and we will continue to do that with whatever tools the Air Force provides us.”

“To take an entirely new airframe and bring it into combat with lethal effectiveness is incredible, and that such a historic milestone for this new airframe was standard operations for our unit is even more incredible,” commented Master Sgt. Joshua, a 432nd WG sensor operator.

Before the Block 5 could even take off, Airmen of the 432nd Maintenance Group prepared the aircraft to fly.

The new MQ-9 aircraft arrived to Creech AFB in late February and additional modifications, such as the battery cables and enhanced generator control units, were completed in April. In May, these MQ-9s were flown locally at Creech AFB to test airworthiness after the modifications. By the end of May they were packed up again and shipped to the area of responsibility.

“Bottom line, the maintainers of the 432nd MXG were instrumental in preparing the Block 5 aircraft for their first combat sorties,” said Col. Matthew, the 432nd MXG commander. “The men and women of the 432nd MXG were responsible for ensuring combat ready aircraft deployed to the AOR. The success of the first Block 5 sortie was not a single effort and required the 432nd Wing to come together. It was the work of a team from the test and evaluation squadron developing the aircraft, to maintenance preparing it for combat and the aircrews executing the mission. We will continue to come together as we prepare for more Block 5s in the foreseeable future.”

“Our Airmen make this look easy,” said Col. Case Cunningham, the 432nd Wing commander. “But the fact is that transitioning and training to directly field a new cockpit and a new airframe into combat with flawless execution, while simultaneously providing continuous multi-role capabilities for the joint and coalition team in our older generation cockpits and aircraft, is nothing short of incredible. It’s just one more reason that these Airmen providing and enabling MQ-9 combat airpower are such highly valued members of the finest joint warfighting team on the planet.”