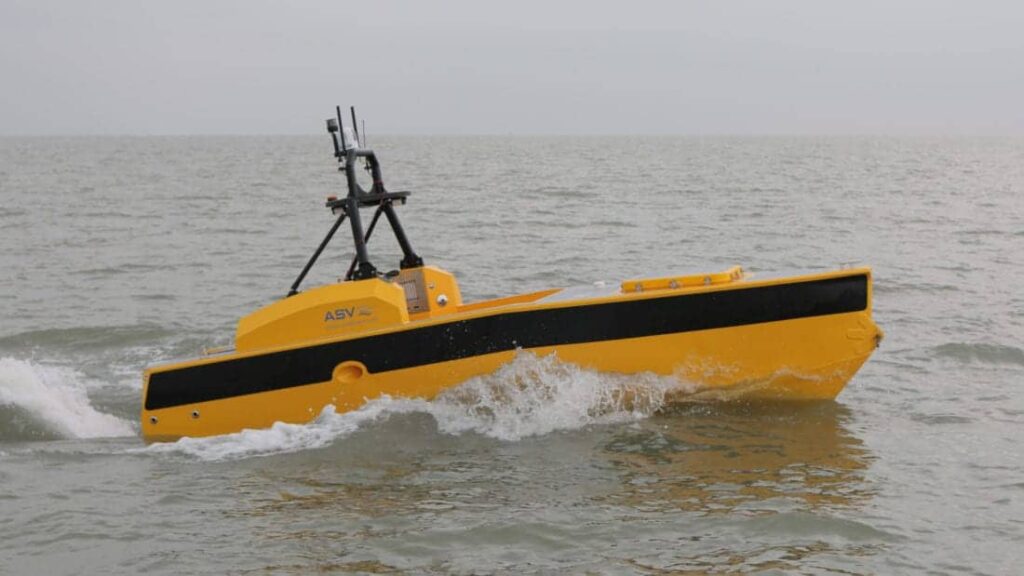 The Autonomous Surface and Sub-Surface Survey System (ASSSS) project combines the advantages of autonomous underwater vehicles (AUVs) and autonomous surface vehicles (ASVs) to further data gathering opportunities. The ASV follows the AUV in order to provide position updates to improve dead reckoning whilst the AUV provides status updates and basic survey information back to the ASV to be transmitted to shore.

The project team conducted trials in Portchester and Plymouth, UK, with ASV Global being supported by project partners Sonardyne and the National Oceanography Centre (NOC). Sonardyne are providing a comprehensive suite of underwater positioning, communications and imaging technology for the Autosub Long Range AUV, which has been developed by NOC. ASV Global was able to demonstrate the functionality of ASSSS across six days during which the C-Worker 5 ASV successfully communicated with, and tracked, the AUV throughout.

An acoustic transceiver in the form of a GyroUSBL was fitted to the C-Worker 5, and an acoustic beacon was fitted to the ALR. In addition to this, a BlueComm 200 underwater optical communications system was used to provide high speed data uploads at set intervals to allow survey data to be uploaded from Sonardyne’s solstice system aboard the ALR. BlueComm is a system used to transmit data via pulses of light in the water, and in a future trial it will be used to send information from NOC’s ALR back to the C-Worker 5.

To enable efficient use of the autonomous vehicles a number of autonomous behaviours have been developed to allow the C-Worker 5 to automatically follow the ALR. If acoustics are lost, due to environmental conditions, the behaviours allow the ASV to hunt for the AUV and provide maximum efficiency when uploading data from the AUV to the ASV through the BlueComm link.

As part of the ASSSS project, the AUV and ASV are linked acoustically using a telemetry tracking method that is used to share location information between the two vehicles, update status information and deliver mission plans. The location information is used by the AUV to update its dead reckoning positions and allow more accurate transit of the vessel while completing a survey or carrying out sampling work. The ASV uses this location information from the AUV to follow the vehicle and maintain a link. The status and basic commands allow the AUV to be controlled through the link from the control base of the ASV. This minimises the need for the AUV to surface for updates and allows better asset utilisation when in the field. Recent trials of the system have been conducted in shallow water and have helped with adapting the system operation to mitigate for shadowing or other interference.

The objectives of this project are to accelerate the wider adoption of unmanned systems and enable long term, low-cost survey and monitoring operations for offshore energy applications, deep sea mining prospecting and Carbon Capture and Storage (CCS) monitoring. There will also be a consequential reduction in the need to place humans in dangerous environments and a greater acceptability of unmanned systems by operators and regulators. Adoption of the technology is likely to spawn opportunities in adjacent market sectors and facilitate cross domain technology transfer.