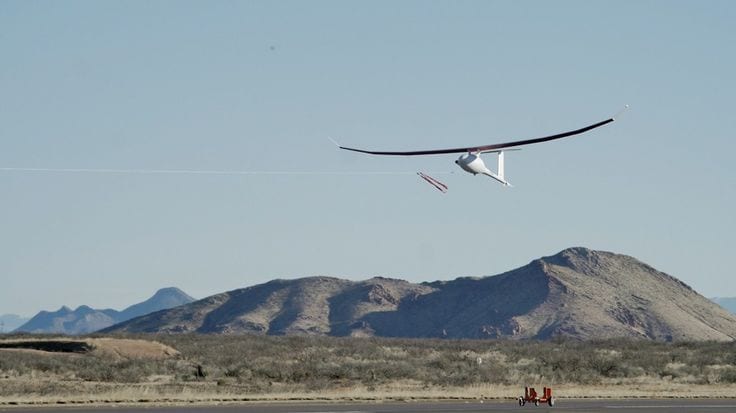 Vanilla Aircraft has announced that the company’s VA001 unmanned aircraft system (UAS) has completed a non-stop, unrefueled 56-hour flight. The flight was submitted for a world duration record for combustion-powered unmanned aerial vehicles (UAVs) in the 50-500 kg subclass (Fédération Aéronautique Internationale Class U-1.c Group 1). A representative from the National Aeronautic Association was present to witness the record.

The flight, planned as a 120-hour mission, was ended early due to forecasted severe icing and range restrictions. However, the airplane landed with enough JP-8 fuel on board for an additional 90 hours of flying, or enough for a total of six days of flight.

The flight was supported by the technology innovation investments of the Department of Defense’s Rapid Reaction Technology Office (RRTO) and DARPA-funded efforts through Naval Air System Command. Originating and ending at Las Cruces International Airport, the flight was conducted under the authority of the New Mexico State University UAS test site designated by the Federal Aviation Administration (FAA).

The airplane carried 20 pounds of actual and simulated payload, flying at 6,500 to 7,500 feet above mean sea level (MSL), and was a further step for the VA001 towards demonstrating the system’s objective performance of carrying a 30-pound payload for 10 days at an altitude of 15,000 feet. The payload included a NAVAIR-provided relay and operated continuously throughout the flight to demonstrate functionality out to the maximum range. The airplane also carried a NASA-provided multispectral imaging payload as a demonstration of Earth science and agricultural remote sensing.

“The VA001 has transformational potential, providing a scalable aerial system solution without increasing personnel or operating costs. The ability of a low-cost platform to provide persistent surveillance, battlefield pattern of life, or aerial mesh network relay, in a responsive and robust manner, and without forward basing, does not currently exist,” said co-founder and chief engineer Neil Boertlein.

Vanilla Aircraft is also planning a role for the VA001 in commercial applications, especially in agriculture. “The VA001 would be a cost-effective option for widespread and regular low-level surveying. We could fill a wide cost and payload-capability market gap between small electric and large military unmanned aircraft, which is perfect for many commercial applications,” says co-founder and program manager Jeremy Novara. Vanilla is currently exploring strategic partnerships and equity financing to expand into this market.