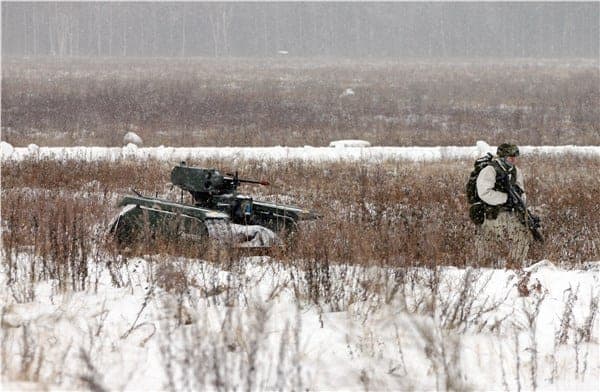 Milrem has announced that, with support from ST Kinetics, it has successfully tested its weaponized fully modular unmanned ground vehicle, the THeMIS ADDER.

With the aim to minimize human casualties and support existing ground troops, the two companies have been jointly developing a weaponized unmanned vehicle. With the cooperation and supervision of the Estonian Defence Forces, the first live fire tests of the vehicle were conducted.

“The tests were intended to test the stability of our platform and see how the remote weapon station and vehicle communicate and work with each other,” explained Kuldar Väärsi, CEO of Milrem. “To our satisfaction everything worked perfectly, you can see as much from the video,” he added.

The THeMIS ADDER was equipped with a CIS 50MG. However the system can also be outfitted with smaller and larger caliber weapons.

“Estonians have proved many times before that we can successfully be on the forefront of innovation and the Milrem unmanned ground vehicle is a great example of that innovation when it comes to new technologies in the military field,” said Lieutenant General Riho Terras, Commander of the Estonian Defence Forces. “THeMIS ADDER has great potential to put Estonia on the map of countries that provide new technologies and solutions to the modern battlefield,” Terras added.

The THeMIS has a payload of 750-1000 kg, speed of 24km/h and up to 10h operation time. In addition to being a machine gun on tracks, the vehicle can be used for a wide variety of applications, including remote reconnaissance platform, C-IED (Counter Improvised Explosive Device) platform, medevac vehicle and supply delivery device.

Watch a video of the THeMIS: