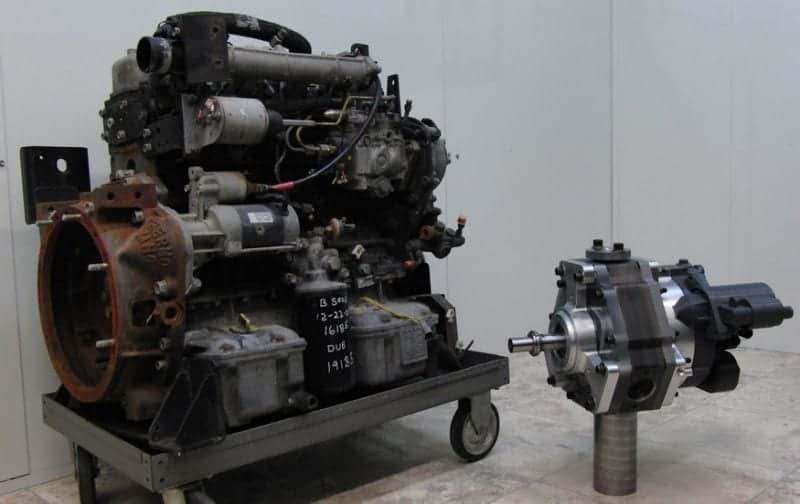 LiquidPiston has announced that the U.S. Defense Advanced Research Projects Agency (DARPA) has awarded the company $2.5 million to continue development of a new, patented, high-efficiency, lighter-weight rotary engine. LiquidPiston, a developer of advanced combustion engine technology, received the award for the first phase of a program to realize the full capability of its patented high-efficiency hybrid cycle (HEHC) engine. This is the second award DARPA has made to LiquidPiston in the past 18 months, following an earlier test program for a different LiquidPiston rotary engine prototype, which achieved promising results.

LiquidPiston will be developing its X4 test rig: a prototype 30 kW diesel X-engine, with targeted brake specific fuel consumption (BSFC) of 186 g/kWh (better fuel efficiency than heavy duty truck engines, and twice the fuel economy of a gasoline engine over a typical drive cycle). The X4 is designed for extremely high specific power, with an objective of 1.5 hp/lb, making it up to ten times (10x) more powerful than a standard diesel engine with the same weight.

The entire 40 hp engine is targeted to fit into a 10″ x 8″ x 8″ box and weigh just 30 lbs. In this first phase of the program, LiquidPiston will build a test rig that will support future optimization efforts towards these objectives.

“Our goal is to create a reliable X4 test rig that will support optimization of the X-engine architecture and the HEHC cycle. Combined, the cycle and architecture offer a compression-ignition, diesel-fueled rotary-engine power solution that is a fraction the size and weight of a comparable piston engine, while offering the advantages of greater fuel efficiency, quieter operation and reduced vibration,” says Alexander Shkolnik, CEO and Founder of LiquidPiston.

“Today, a typical 30 kW military diesel generator weighs 2,700 lbs. Such a generator can be used to power a mobile command center, for example. Soldiers would benefit as the X4 prototype would enable an ultra-portable diesel generator that produces electricity in a package one-tenth the size and weight, and operates with greater efficiency,” explains Shkolnik. “We seek to help reduce the military’s logistical and carbon footprint. Our design would also give greater range and capability to drones or other vehicles. The same technology would benefit civilian consumers as well – lighter, quieter more efficient generators or auxiliary power units for homes, boats or vehicles, as well as range-extended electric vehicles.”