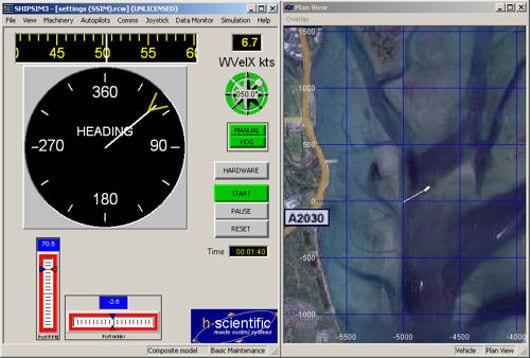 H-Scientific Ltd (HSL), a developer of ship simulation technologies, has announced the release of ShipSim 3 and AUVSim, simulation software packages for surface and sub-surface vessels respectively. Both simulators allow autopilot and unmanned vessel designers the ability to simulate the vessel control and dynamics prior to committing to expensive sea trials.

Ship Sim 3 is a surface vessel simulator that can be configured using the ISO16329, IEC 62065 or proprietary detailed model, to model the behavior of a large range of ships. Applications include autopilot test and development, and training. Features include:

HSL’s founder, Dr Henry Robinson, stated: “With an increase in the number of autonomous vessels being designed and the increased cost of sea trials and the resultant delays in the time to market, we offer a cost effective aid to the design process. It is a proven way to optimise the design.”