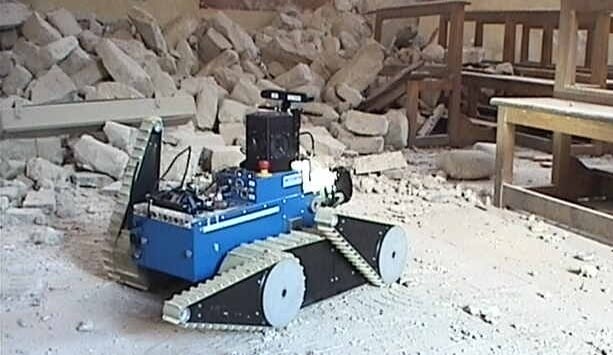 A team from the TRADR project, a European Union FP7-funded initiative to develop technology for human-robot teaming in disaster response, has announced that it has deployed two Unmanned Ground Vehicles (UGVs) and three Unmanned Aerial Vehicles (UAVs) in Amatrice, Italy, to assist the post-earthquake response. The team, composed of TRADR project collaborators from Sapienza University, Czech Technical University, Fraunhofer Institute for Intelligent Analysis and Information Systems, and Ascending Technologies, was assembled on short notice and arrived at the earthquake disaster site in Amatrice within 48 hours after receiving the request for help from the Vigili del Fuoco (VVFF), Italy’s institutional agency for fire and rescue service.

The goal was to use robots to provide 3D textured models of two churches, both national heritage monuments from the 14th century: San Francesco and Sant’ Agostino. Both churches are in a state of partial collapse and in need of shoring to prevent potential further destruction. The models will help to plan the shoring operations and to assess the state of various objects of cultural value inside the churches, such as valuable frescos.

The UGVs successfully entered the San Francesco church, teleoperated entirely out of line of sight, and partially in collaboration. For part of the mission one UGV provided a view of the other to enable maneuvering in very constrained space with low connection bandwidth. One of the UGVs operated in the church continuously for four hours.

Several flights were carried out on the outside and one flight inside of each church. Entering with a UAV was a tough challenge which was only managed due to a collaboration between three UAVs operated in parallel. While one UAV entered through a hole in the roof, the other two provided simultaneous video feed from different angles, which the pilot used as an additional source for orientation. An assistant who watched the video gave the pilot flying instructions.

The mission fulfilled its goal to collect data for the construction of high quality textured 3D models, which have since been provided both to the VVFF and to the Italian Ministry of Culture. The VVFF has expressed appreciation for the success of the mission, and expressed the intention to continue and further deepen collaboration.