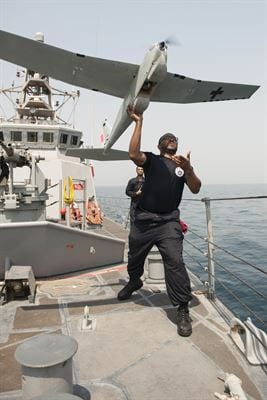 The U.S. Navy has confirmed that the coastal patrol ship ‘USS Monsoon’ has tested the capabilities of the RQ-20A Puma AE (All Environment), during a Griffin Missile System test in the Arabian Gulf on 19-25 July. The Puma can be operated in many scenarios at sea and throughout the U.S. 5th Fleet area of operation (AOO) such as man overboard, personnel recovery, search and rescue and visit, board, search and seizure (VBSS) exercises and operations.

“The goal was to put Pumas on ships that don’t have a helicopter or an organic airborne capability of some kind,” said Inez Kelly, Office of Naval Research Science Advisor. “The Pumas and other small UAVs give those platforms some eyes in the sky they never had before. They allow ships to have better situational awareness of where they are by providing an over-look capability.”

“While Puma is most commonly employed as a precursor search and overwatch platform to support her VBSS team, and it is also commonly used for area surveillance and range clearance during gunnery exercises,” said Lt. Cmdr. Bryan Hart, commanding officer of the USS Hurricane (PC 8). “During a recent gunnery exercise, Puma operators were the first to identify inbound navigational concerns, allowing for increased reaction time from the navigation team due to the significant increase in the distance in sight Puma provides beyond that of the ship.”

The Puma can be assembled, hand launched and operated in fewer than 10 minutes by a two-man team, which can consist of personnel from numerous rates throughout the Navy. The Navy is utilizing the Marine Corps training facility on Camp Lejeune to get Sailors qualified.

“The Commander, Patrol Coastal Squadron (PCRON) One Fleet has multiple rates with the ability to fly the Puma,” said Senior Chief Electronics Technician Anthony Witters, PCRON One Combat Systems Readiness Division Leading Chief Petty Officer. “A lot of the billets on a coastal patrol ship are one person does it all. If a qualified person leaves for some reason, whether they get sick or go limited duty, the ship can still operate because it will have other rates that have that same ability.”

The Puma has also been used by the guided-missile destroyer USS Gonzalez (DDG 66), but has never been fully integrated as a tool in the ship’s cache of weapons to utilize in intelligence gathering during deployment.

“The Gonzalez was the first ship to get an older model of PUMA,” said Fire Controlman 1st Class Lauren Cagle, one of Stout’s six PUMA flight crewmembers. “Unfortunately, due to their tasking, they were unable to utilize the PUMA to its full potential, therefore making Stout the pioneering ship for the new PUMA and PUMA landing recovery net system.”

Although it has improved capabilities of the fleet during exercises and normal operations, there are still challenges that come with operating the Puma from a surface platform.

“I think one of the biggest challenges we face is, the color of the Puma which is about the same color of the water out in the middle of the Gulf,” said Witters. “So when we land a Puma in the water, sometimes they are hard to find. It does have an infrared strobe on it, but depending on the day or how it’s sitting in the water, we do face some challenges finding it.”

With advancements to the Puma UAV such as solar wing capabilities which will extend flight time, and advanced optical devices, the potential of use in the AOO in the future is endless.

“The Navy likes to think about big ships, big things, and all these amazing things you can do,” said Kelly. “As the Navy grows and comes up with more, smaller platforms, you have to make them capable to contribute to the mission. The PCs out here do amazing work. They work their butts off every day, and giving them just a little bit more capability so they can do their jobs more effectively, safer, more efficient; that’s what the Puma brings to that fight.”