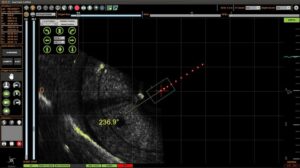 SeeByte, a provider of smart software for unmanned maritime systems, and Tritech International Limited, a developer of imaging equipment for use in underwater applications, have announced that they have successfully integrated Tritech’s Gemini sonar onto SeeByte’s CoPilot software. The system was demonstrated on Heriot-Watt University’s Seaeye Falcon 1256 ROV in the university’s wave tank facilities.

CoPilot provides ROV pilots with a simple point-and-click tool to fly the ROV. It is already integrated into Heriot-Watt’s Falcon ROV, and can also be used to pilot other ROV systems. By integrating the Gemini, the ROV pilot can simply point on the sonar data and the ROV will automatically move to the required coordinates.

Scott McLay, Sales Director at Tritech, commented: “It was great to see the system in action; CoPilot is a very intuitive software package. The combination of the Gemini and CoPilot in one integrated system really allows end-users to get the most out of both the software and the sonar. This is another way in which we can add value to Tritech customers.”

CoPilot permits pilot-controlled auto-transit and stop-and-hover, whilst providing automated sonar tracking and movement relative to a target. CoPilot is easily retrofitted to any ROV system, but is also available from the factory with VideoRay, Seatronics and SMD.

Available as a commercial off the shelf product, the Gemini 720is sonar provides enhanced real-time target tracking capabilities to users through SeeByte’s advanced tracking analytics.