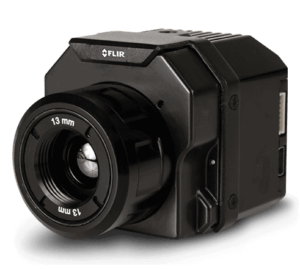 The Vue Pro R retains all of the capabilities in the standard Vue Pro model but adds calibrated radiometric imaging that allows it to capture the temperature data of every pixel in an image. When saved in Radiometric JPEG format, still images can be imported into FLIR Tools software for detailed analysis and reporting. FLIR Tools lets drone operators adjust settings including object emissivity, background temperature, target distance, relative humidity, thermal sensitivity as well as assigning various color palettes for each image.

“Without a doubt, radiometry is the most popular feature drone operators have requested, and we’re delivering that with Vue Pro R,” said Jeff Frank, FLIR’s Senior Vice President for Product Strategy. “FLIR has pioneered thermographic cameras for more than 50 years and our expansion of high-performance capabilities like radiometry to drone operators is another example of our ability to provide state-of-the-art thermal technology to people that need it.”

An updated mobile app with advanced radiometric functions uses the camera’s Bluetooth interface to connect to iOS and Android devices, making camera set-up and configuration easy. Through the app, operators can configure functions to ensure the best imagery possible for their conditions without having to connect the camera to a computer.