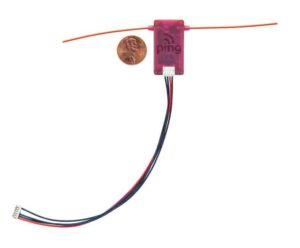 uAvionix, a developer of ADS-B transponders and receivers, has announced that it has partnered with DJI and Stanford University to develop sense and avoid technologies to help ensure safe aircraft separation. The partnership has developed following an increase in incidences of drone/airliner “near misses.”

Eric Mueller works at the NASA Ames Research Center and is a Ph.D. candidate at Stanford University. He co-authored a paper with his professor, Mykel Kochenderfer at Stanford, titled “Multi-rotor Aircraft Collision Avoidance using Partially Observable Markov Decision Processes.” The paper describes how speed changes by agile multi-copters and small unmanned aerial systems (UAS) can be used in addition to horizontal and vertical maneuvers to maintain safe operating distances between aircraft.

The Markov Decision Process (MDP) uses algorithms to model decision making, such as how an aircraft decides to maneuver to avoid oncoming traffic. MDP is applied in situations where some variables are possibly random (such as how another aircraft may decide to maneuver) and others are under the control of the decision maker (such as an aircraft’s autopilot.)

uAvionix supplied its miniature “ping” ADS-B hardware for tests at Stanford to determine the effectiveness of the sense and avoid algorithms under development.

“Ping was the only system that provided a realistic way for us to validate our sense and avoid algorithms with live traffic for commercial aircraft separation assurance,” said Mueller.

“It was awesome to see our device in action providing real-time positions of commercial aircraft. This is a key part to our overall strategy to construct a safer sky,” said Paul Beard, uAvionix CEO.

ADS-B units in the past were too large and too expensive for small drones. uAvionix has recently introduced “pingRX,” an affordable, tiny ADS-B receiver that weighs 5 grams and measures less than a square inch.

uAvionix will be exhibiting its ADS-B receiver technologies at sUSB Expo in San Francisco and the Xponential/AUVSI trade show in New Orleans.