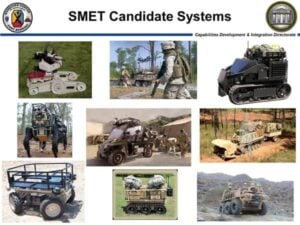 The U.S. Army has confirmed that it, in partnership with industry, is in the process of developing requirements and capabilities for Squad Maneuver Equipment Transport (SMET), designed to haul a squad of Soldier gear for a typical 72-hour patrol. Early prototypes are being tested by Soldiers at Fort Bliss, Texas.

“What it looks like and what it will be capable of doing is still pretty much an open question.” said Thompson, chief, Soldier Requirements Division, U.S. Army Training and Doctrine Command Capability Manager – Soldier at a robotics conference here, March 2.

While specific capabilities are yet to be put in writing, the Army has already provided the outline of what SMET might look like. First and foremost, the SMET should be able to transport Soldier gear during a mission and keep pace without holding Soldiers back.

The SMET must also be able to carry more energy than that required to power it in order to charge Soldier devices. During security halts, the SMET could be in charging mode.
Operational energy (such as new battery technology, generation and alternative fuels), therefore, will play an important part in development.

Size will be a critical factor – it must be large enough to carry heavy loads, but small enough to travel through thick jungle. Currently, the Army is roughly defining its size as something capable of fitting in the back of a helicopter or slung load below.

Thompson added: “SMET might also be able to carry an array of sensors and weaponry for which to defend itself, with a Soldier in the loop.”

Finally, SMET should be autonomous or semi-autonomous, so it can follow along with Soldiers with a minimum of control.

Aside from patrolling, the SMET could be used for perimeter security at forward or contingency operating bases, thereby reducing risk to Soldiers and manning requirements. Inside the perimeter, it could serve to function supplies back and forth.

Stu Hatfield, chief, Robotics Branch, Army G-8, pointed out that some early variants of SMET were used to tow Soldiers on skis in Alaska, and follow Soldiers through jungles in Hawaii.

“We’ve been in the dating stage with ground robotics for quite some time,” Thompson concluded. “Now we want to marry it by getting it in the hands of the Soldiers.”

The Army is currently in the increment 1 stage, purchasing a limited number for testing by troops in the brigade combat teams, he said. The Army hopes to get a prototype in the coming years.