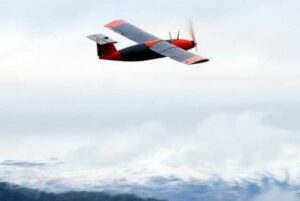 The Scottish Association for Marine Science (SAMS) completed a test flight using Cella’s hydrogen based power system. The system is based on Cella’s solid, lightweight hydrogen storage material which is capable of releasing large quantities of hydrogen when heated.

Cella has designed and built a gas generator using this material, which when combined with a fuel cell creates electrical power. The complete system, that is a Cella gas generator along with a fuel cell supplied and integrated by Arcola Energy, is considerably lighter than the lithium ion-battery it replaced. The work was funded by a grant from Innovate UK and has enabled Cella and Arcola to design and build a power system that could be incorporated into the Raptor E1, built and designed by Trias Gkikopoulos of Raptor UAS.

“This flight used a small prototype system and we were pleased with the initial flight with another flight scheduled to take place in the near future. The larger versions of this system that we are already designing will have three times the energy of a lithium-ion battery of the same weight,” said Stephen Bennington, Cella’s Managing Director.

The system uses around 100 solid pellets packed into a cartridge. The 1-centimetre-squared pellets are made from a chemical compound that produces a steady stream of hydrogen as they are gently heated.. This gas is then converted into electricity in a fuel cell that runs the drone’s rotor. The inclusion of a polymer stops the compound melting and helps it release hydrogen at a lower temperature.

The test flight lasted for 10 minutes and flew at an altitude of 80 metres – although it could have gone for two hours with the fuel it had on board, says Phil Anderson, head of Marine Technology at the Scottish Association for Marine Science in Argyll, UK, where the flight took place. “Unlike with a battery, if you put in twice as much fuel you can go twice as far.”

“This is an exciting market for us,” explained Alex Sorokin, Cella’s CEO. “It is growing rapidly and users are in desperate need of a power source that can outperform existing technologies in sectors ranging from emergency services to companies wanting to survey or map their infrastructure, be it a wind turbine or a gas pipeline.”

“As both developers and users of UAVs, we have been excited about the potential of this technology ever since we first met the teams from Cella Energy and Arcola,” said Phil Anderson, head of Marine Technology at SAMS.

“Clean and dependable power in a UAV, such as this hydrogen-electric system, is essential for a range of environmental and climate monitoring, from methane sampling over tundra to CO2 exchange with the oceans. Lightweight power has been a limitation for aircraft – perhaps not for much longer.”

Ben Todd, Managing Director of Arcola Energy said, “We were delighted to have been able to validate Cella’s novel hydrogen generation capability, and to collaborate in this successful fuel cell integration into the challenging physical package of an airframe.”

Cella’s solid-state hydrogen storage technology also addresses the issues that surround the transportation of compressed gaseous hydrogen. Cella’s material is a solid and is not under compression, is stable in air and at temperatures below 500C. For this reason Cella is also working on aerospace systems with its partner, Safran’s Herakles division, which is soon to become part of Airbus-Safran Launchers, a joint venture between Safran and Airbus. The two have been working together to prove the feasibility of using Cella’s hydrogen storage material for aerospace applications. They have built a working system, and have gone a long way to understanding many of its safety, performance and certification requirements.