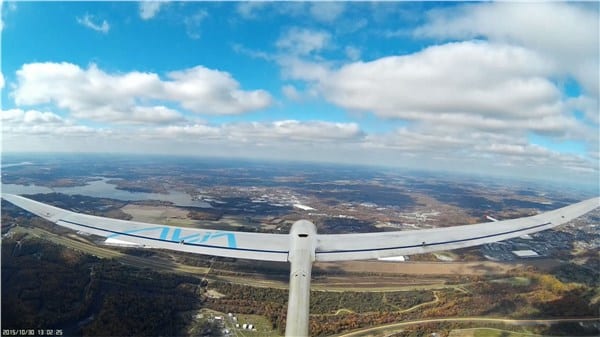 The team launched 23 flights over a nine-day period resulting in greater than 30 hours of combined flight. The tests, conducted within restricted airspace at Phillips Army Airfield, Aberdeen Proving Grounds, culminated with two ‘powered’ sailplanes sharing telemetry data and cooperatively and autonomously soaring at altitudes in excess of one kilometer and for flight durations of over five hours.

“Autonomous soaring algorithms seek out naturally occurring areas of rising air called thermals,” said Dr. Dan Edwards, aerospace engineer and principle investigator of the solar-soaring program. “Cooperative autonomous soaring combines data from multiple autonomous soaring aircraft to make a more complete measurement of the local atmospheric conditions. This atmospheric map is then integrated to guide both aircraft toward strong lift activity quicker than if it was just a single aircraft, a technique very similar to that used by a flock of soaring birds.”

Both aircraft demonstrated a robust autonomous soaring capability during the two weeks of testing. PSU’s aircraft flew multiple 2.5-hour flights despite carrying a battery with only enough capacity for four minutes of motor run-time. NRL’s best soaring flight was 5.3 hours while only running a motor-driven propeller for 27 minutes. Both aircraft rode thermals to altitudes in excess of 1,400 meters with several individual climbs in excess of 1,000 meters using nothing more than the power of the atmosphere.

“These tests showed both the NRL and PSU’s autonomous soaring algorithms are successful at finding and using thermals by themselves,” Edwards said. “More importantly, this testing showed proof of concept on multiple occasions, with both aircraft finding thermals and ‘calling’ the other aircraft over to use the same area of lift to increase endurance of the swarm.”

Future testing will focus on reducing the separation distance such that both aircraft can actively soar in the same thermal at the same altitude. The team will also investigate the inclusion of solar photovoltaics to the cooperative autonomous soaring techniques, enabling long endurance flights of unmanned sailplanes using the power of the sun.

Solar photovoltaics will allow conversion of solar radiation directly to electricity to charge batteries or provide power for longer endurance or payloads. NRL is developing “drop-in” power electronics and solar wings, which will enable charging batteries and aiming for overnight flight.

The Solar Photovoltaic and Autonomous Soaring Base Program and the US Marine Corps’ Expeditionary Energy Office Cooperative-Soaring Program are aimed to improve the availability of a 24-7 Information, Surveillance, and Reconnaissance (ISR) mission without using logistics fuel, benefitting the expeditionary warfighter by enhancing the endurance of existing and future UAV assets.