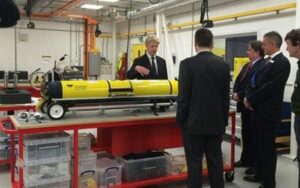 NERC, a UK environmental science agency, has announced that a new Marine Robotics Innovation Centre has been opened at its National Oceanography Centre (NOC) in Southampton. The centre will be a hub for businesses developing autonomous platforms, with novel sensors that will be used to cost-effectively capture data from the world’s oceans.

“I was honoured to open the new Marine Robotics Innovation Centre at the UK’s world class National Oceanography Centre in Southampton. The UK is leading the way in marine science and this new facility will help to put wind in the sales of our marine industry.”

“NERC’s National Oceanography Centre is not only one of world’s leading institutes for the study of our oceans, but has also led the world in the development of marine autonomous systems to explore this most hostile environment. This investment promises to redefine our approach to sustained observations of the oceans and their living systems. The new Marine Robotics Innovation Centre has been created to further develop emerging marine robot technologies and to maintain our world-class status. It brings together NOC engineers and their industry colleagues to foster innovation and build this sector, translating science into technological solutions.”

“The launch of the Marine Robotics Innovation Centre is a very important development, because it is all about turning great science into great innovation for the benefit of the UK economy.

Autonomous measurement systems for the ocean have grown out of demands for frontier science in extreme environments. Much like space science, oceanography too creates spin-offs which bring technologies back into more everyday use for a wide range of applications.

Marine autonomous systems offer to transform the work of many sectors, including environmental monitoring. For example, they will improve data collection for weather and climate prediction, for defence, and for the emerging needs of offshore energy and other industries.

Not only are there multiple applications, but the UK also has a diverse, vibrant sector of small technology companies able to take the innovations to wider markets. We will be working alongside several of these companies in the centre and engaging with the associate members, who are likely to be major users of the technology developed there.”

The Marine Robotics Innovation Centre has been operational since the summer of 2015. Planet Ocean Ltd, ASV and SeeByte Ltd have already moved into the centre, which provides office and testing facilities along with access to specialist instrumentation

In addition, NERC, Innovate UK and DSTL are investing over £13m in Small Business Research Initiative projects, the first of which has led to the development of two highly innovative autonomous surface vehicles that are now competing on the global stage. The two small and medium-size enterprises involved in this project have already received orders in excess of £1·1m, accompanied by steadily growing workforces, and are selling into oil and gas, defence and other offshore sectors, where reducing costly ship time, improving safety and long-term monitoring are driving adoption of robotic technologies that can stay at sea for weeks, or even months, unmanned.

The Marine Robotics Innovation Centre was born out of the government’s ‘eight great technologies’ funding initiative. The funding has built the innovation centre and provided capital investment for a range of underwater robotic equipment that can go further and deeper than most systems in commercial use.