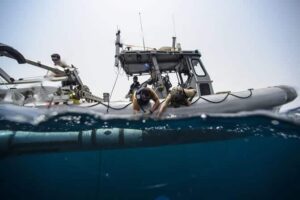 The UK’s Royal Navy has announced that, along with its US counterparts, it has surveyed the sea bed for mines more than 200 nautical miles away from its Bahraini base using a range of autonomous and unmanned minehunting systems.

The Task Group was made up of HMS Shoreham and Bangor, the USS Devestator and Gladiator as well as Royal Fleet Auxiliary Cardigan Bay which ensured the ships were supplied with fuel, water and stores while on patrol. In addition to using the specialist minehunting skills of the four ships, the Task Group also made use of cutting edge technology and small boats which were launched from RFA Cardigan Bay. These meant the team could survey hundreds of miles of seabed at a time to detect what is already on the seabed so that they objects can be discounted if mining is ever suspected in the area in the future.

The Task Group’s commander, Commander Paul Ottewell of the Royal Navy, said: “Though our mine countermeasure vessels (MCMVs) and embarked expeditionary units are all experts in their own fields, we must be able to operate effectively together, so that we are collectively greater than the sum of our parts.

“We can then deliver a single, coherent and consistent message of reassurance to the International Shipping industry who use these important routes on a daily basis.”

The information brought back from the ships built up a very detailed picture of the seabed on the key shipping routes through a number of key strategic areas in the Gulf. This was achieved through a combination of high-definition sonar, state-of-the-art autonomous surface and underwater vehicles, remotely-operated vehicles and highly-trained mine clearance divers.

The divers were from the Royal Navy’s Fleet Diving Unit 3 (FDU3), usually based at Portsmouth, and a US Navy Expeditionary MCM Company and this was the first time the two units had worked together on operations. Both are made up of underwater explosive ordnance disposal specialists whose main role is to spot suspicious underwater contacts and then make them safe.

The combined dive teams use remotely operated vehicles fitted with their own sonars, meaning they can identify and dispose of ordnance from afar as well – at much less risk to themselves or their colleagues.

Commander Ottewell said: “As new generations of off-board systems become operational, we are increasingly able to find and destroy sea mines at deeper depths, more rapidly and with less risk to human life. Autonomous and semi-autonomous systems are rapidly coming of age, complementing the capability of our world-class MCMVs to produce an expeditionary MCM task group with substantial resilience and speed of advance through a mine field.”

FDU3’s Lieutenant James George, added “The Fleet Diving Unit is held at high readiness to deliver military diving capability around the world, be that identifying underwater objects or disposing of dangerous ordnance. This operation provided an ideal opportunity to fully integrate with our colleagues from the US Expeditionary MCM Company, exchanging best practice and forging long lasting relationships.”

Another world-class capability embarked in RFA Cardigan Bay was the US Navy’s experimental Mine Hunting Unit (MHU) with their Unmanned Surface Vehicle. This vehicle is fitted with a mine-hunting sonar to detect underwater objects.

Lieutenant (Junior Grade) Andrew Wasz from the US Navy, said: “Though we are an experimental unit, we fully contributed to the efforts to ensure the areas remain safe for shipping. This technology is the future of MCM operations and we will take every opportunity to demonstrate its full capability.”

The use of the MHU is a prime example of how both countries are looking to use more unmanned systems to ensure less risk to divers and sailors.

UK and US MCMVs are already fitted with the Seafox Mine Disposal System – a remotely operated vehicle that can identify underwater objects and render them safe if necessary.

The Task Group was commanded by US Commander Task Force 52 (CTF 52) in Bahrain and tactical control afloat was delivered by the UK’s Mine Warfare Battle Staff (MWBS) embarked on RFA Cardigan Bay.

The MWBS were tasked to refine, execute and evaluate MCM operations. Logistics Coordinator, Lieutenant Ben Crouch, said: “The difficulties involved in supporting four ships and embarked units, over a large geographical area, is a challenge. However, RFA Cardigan Bay provides the perfect platform to achieve this.”

He added: “This is my first experience of working on a Battle Staff where we have specialists from a range of backgrounds, including engineering, intelligence and meteorology, who are planning operations and assisting our ships. It has certainly been a busy but professionally rewarding operation.”