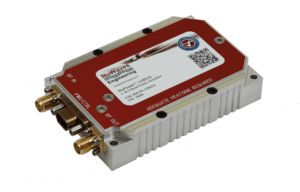 The NuPower 12B01A model, which replaces the L- & S-Band Power Amplifier model, delivers a minimum of 10 Watts (typically 13 Watts) of RF power from 1000 to 2500 MHz when sourced with a 0 dBm (1 milliwatt) RF input signal. Featuring improved power efficiency in the 30% to 50% range, and 40 dB of RF gain, the NuPower 12B01A provides high-efficiency RF amplification for a variety of transmitters, transceivers and data links that do not require linear performance.

An alternative product configuration is available with reduced gain that accepts a +30 dBm (1 Watt) RF input signal from the transmitter, supporting a common RF output level of industry data links, such as L-3 Communications’ Bandit.

“Our flagship broadband power amplifier module has been improved in several key areas as a direct result of feedback received from our customers over the past few years,” said Jeff Wells, President and CEO of NuWaves Engineering. “This new release has already proven successful, as evidenced by contracts we’ve recently received from two of the U.S. military’s prime ‘Group 3’ unmanned aircraft systems (UAS) contractors for payload communications range extension.”