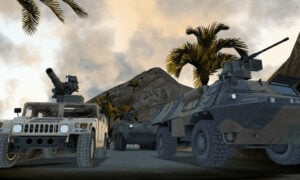 VR-Forces 4.3.1 is a major maintenance release that greatly improves VR-Forces 3D visualization while simultaneously fixes a number of important defects.

VR-Forces is built using the VR-Vantage graphics engine. This release incorporates the significant improves to visualization found in VR-Vantage 2.0.1, such as:

Other features added to this release include:

A complete list of the improvements can be found in the release notes: VR-Forces 4.3.1