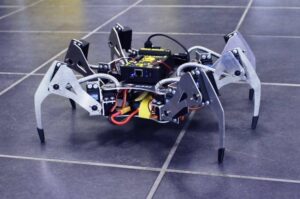 Erle Robotics, a developer of Linux-based robot systems, has announced the Erle-Spider, a hexapod robot powered by Ubuntu.

The Erle-Spider, with 3 degrees of freedom per leg, is an open source and cost-efficient platform, and Erle Robotics aims to make it the premier ground-based drone for education and research. All of the Erle-Spider’s behaviors, dynamical models and sensors are based on the popular Robot Operating System (ROS) open-source development kit.

In addition to offering a versatile platform for hard-to-reach places, such as pipes or disaster areas, Erle Robotics’ Spider is opening the door to a new field of development in the drone market, providing affordable prices for developers and researchers in robotics.

“The Erle-Spider shows just how easy it is to build an essentially complex robot, when powered by our robotic brain (Erle-Brain) and adding functionality from the Ubuntu-based app store. It will particularly appeal to developers, universities, R&D centers, and anyone who just wants a fun project,” said CTO Victor Mayoral Vilches.