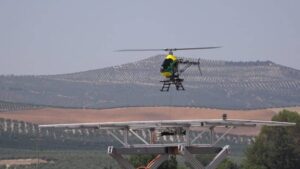 The Centre for Advanced Aerospace Technologies (FADA-CATEC) has announced that its EC-SAFEMOBIL project has achieved the first tethered landing of an unmanned aircraft on a platform moving in three dimensions and without GPS. The project, an initiative under the European Commission’s VII Framework Programme for R&D, is a collaboration between FADA-CATEC, the University of Seville and other companies and research organisations from five European countries.

The achievement paves the way for the implementation of tethered landings of UAS on boats and land vehicles, which is a further part of the objectives of the EC-SAFEMOBIL project. The project’s aim is to develop new multi-vehicle cooperation technologies using unmanned aerial systems, particularly new methods of accurate position estimation and motion control that will make UAS and ground autonomous systems more secure and reliable for a wide range of applications such as disaster management, search and rescue (especially under extreme conditions), security and other missions that involve a risk to humans.

The test was conducted at the ATLAS Experimental Flights Centre. These are the only facilities in Spain that have been designed specifically to test light unmanned aircraft.

The test utilised an unmanned electric helicopter and a clamping device based on a rope and a 3D moving platform, specifically created for the development of the test, and the system did not make use of GPS or any other satellite positioning systems. Several experiments were carried out to: i) perform an automatic landing UAV on the mobile platform simulating bad weather conditions (high winds and major movement of the landing platform); ii) successfully apply a fastening system to compensate for disturbances and relative movement between the aircraft and the platform; iii) increase security during operation and enhance integration with the UAV flight control system.

The results of this trial are of great interest to the aerospace sector, as they could be applied to landings in situations where such operations may involve a moving landing platform and wind conditions, during the absence of reliable satellite positioning signals. Furthermore, these developments are being implemented while taking into account conditions that may facilitate the integration of UAVs into non-segregated airspace, thus potentially making them useful in scenarios in which people can also intervene.