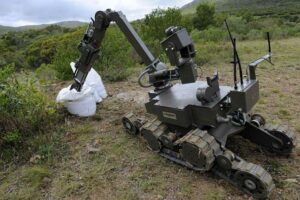 Northrop Grumman Remotec will give members of the International Association of Bomb Technicians and Investigators (IABTI) a first look at the Andros FX during the IABTI’s annual International In-Service Training conference.

The most visible features of the Andros FX are the four track pods that replace the traditional Andros articulators and a new arm design with more lift capacity and greater dexterity by adding roll joints that provide nine degrees of freedom. It also features updated system electronics, mobility improvements for increased speed and maneuverability, and a new touchscreen operator control unit with 3-D system graphics, advanced manipulator controls and improved user interface.

“Bomb squads have told us what they need most are more capabilities to counter vehicle-borne IEDs,” said Walt Werner, director, Northrop Grumman Remotec. “Andros FX was designed from the ground up based on that feedback to give the bomb tech community the most advanced technology while at the same time making the system easier to use and maintain to keep danger at a distance.”

The Andros FX builds on Remotec’s F6 family and its 20-year record as a workhorse for first responders and the military. Like other robots in Remotec’s Andros fleet, its operating system provides much greater information to the operator while easing user workload through more interactivity with intelligent payloads such as chemical and radiation sensors. Preset arm positions and the ability to “fly the gripper” make manipulation of objects much easier, faster and more accurate.

Andros FX was designed using a proven concurrent engineering process to develop a superior product at an affordable price. Werner said increased cross-functional involvement early in the design phase results in a much lower lifecycle cost as well as a product that can be quickly adapted for a variety of missions, easily upgraded and expanded, and more efficiently maintained.