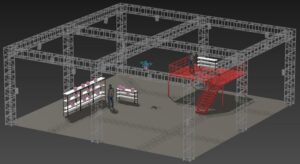 The Center for Advanced Aerospace Technologies (CATEC), an advanced technology research and development centre located in Spain, has announced that it is one of five research teams that has been selected to participate in the European Robotic Challenges Forum (EUROC). CATEC’s pilot project will focus on the application of aerial robots to the processes of manufacturing and aircraft structure assembly in aerospace factories.

The initiative, called ARCOW (Aerial Robot Co-Worker in Plant Servicing), scored second of those selected in this first phase of the competition. ARCOW is framed within the objective of increasing the implementation of new technologies to improve manufacturing processes in aerospace, through automation that can be performed by robots or unmanned systems. One of the major challenges that needs solving is that of of safe indoor navigation.

The ARCOW project aims to develop two different applications that will improve productivity by reducing operation time and manufacturing costs in aeronautics. The first application consists of the localization and identification of goods that can cause Foreign Object Damage (FOD). The second is the logistics behind certain processes in aircraft manufacturing that involve hundreds of small parts, such as tools, bags of rivets, seals and other small components, and are usually performed at a significant height.

Both applications will have a large impact on manufacturing operations. It is estimated that these processes take between 10% and 15% of the processing time and 10% of the production lead time. The elimination of these waste times by using aerial robots will lead to an increase in business profit.

The ARCOW project will be developed by a consortium led by the University of Seville’s Robotics, Vision and Control Group and involving both CATEC and Airbus Defence & Space through its CBC (Centro Bahía de Cádiz), located in El Puerto de Santa María (Cádiz).

The University of Seville and CATEC will bring their experiences in localization, data fusion, navigation, control, and human-machine interfaces (HMI) to the project to develop an aerial robot prototype that improves the efficiency of the aforementioned manufacturing processes. CATEC will also make available its indoor testbed, with a volume of 15x15x5 meters and equipped with an accurate positioning system, to contribute to the acceleration of development and testing activities. Airbus will take charge of defining required resources and describing the constraints and limitations of these particular applications, thus helping to identify the major challenges to be overcome, as well as providing the pilot manufacturing plant.

ARCOW will help Airbus DS to become one of the pioneering companies in the application of aerial robots for automation processes in manufacturing facilities. Furthermore, it will contribute to the advances of aerial robotics in previously unexplored applications.