Scientists aboard NOAA Ship Okeanos Explorer have begun a series of 20 dives to investigate previously unseen depths of the Caribbean Sea and Atlantic Ocean – and the public can watch live video streaming online until 30th April. 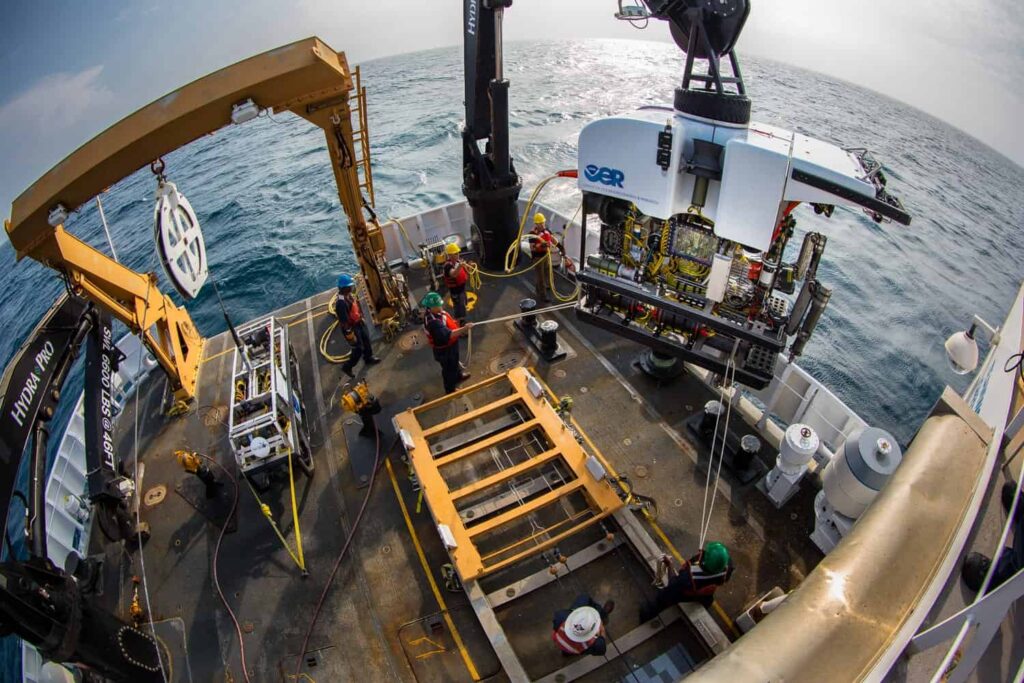 Okeanos Explorer’s dual-body ROV system is loaded from the aftdeck of the ship into the water before conducting an exploration dive. (Credit: NOAA.)

During dives that are expected to go as deep as 3.7 miles, a sophisticated unmanned submarine (remotely operated vehicle), will broadcast live video from the seafloor, allowing anyone with Internet access to watch the expedition as it unfolds.

“We’ll be exploring an area of the United States Exclusive Economic Zone that science knows very little about,” said Alan Leonardi, Ph.D, director of NOAA’s Office of Ocean Exploration and Research, the federal program responsible for coordinating this expedition. “In order to understand and sustainably manage the ocean’s resources, we first have to survey what resources exist.”

Many of the expedition’s anticipated 20 ROV dives will take place in the Puerto Rico Trench, which is nearly 500 miles long and nearly 5.4 miles at its deepest – deeper than anywhere else in the Atlantic Ocean basin. Other areas to be explored include the Muertos Trough, Mona Channel and Virgin Islands Trough.

During the dives, Okeanos Explorer’s two-body ROV system will continuously capture high-definition video, which the ship will transmit to the Office of Ocean Exploration and Research’s website, www.oceanexplorer.noaa.gov, where anyone can follow along in near-real time.

“We don’t know exactly what we can expect to see,” said Lt. Brian Kennedy, the expedition’s coordinator and a member of NOAA’s Commissioned Officers Corps. “That’s precisely why we explore.”

But, he added, scientists do know a few things about the area: They know that it is tectonically active, with some seismic hazards such as earthquakes and tsunamis. They are also fairly certain the area contains deepwater snapper populations, deepwater corals and geological features such as seamounts and mud volcanoes.

Because of these characteristics, the area was identified by members of the ocean science community as important to explore, and data from the expedition will likely have long-lasting implications for scientists and resource managers in the Caribbean. As many as 40 scientists ashore are expected to participate remotely in the expedition. 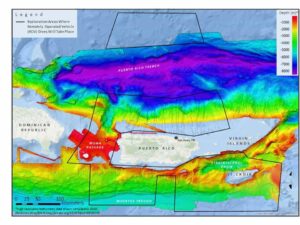 This map shows the areas NOAA Ship Okeanos Explorer will explore during the 20 ROV dives to be conducted between April 10 and 30 in and around the Puerto Rico Trench and the U.S. Virgin Islands. Data displayed provided by ESRI, Delorme, GEBCO, USGS, NOAA NGDC, and other contributors; map created with ESRI ArcMap software. (Credit: NOAA.)

Okeanos Explorer, which is operated, managed and maintained by NOAA’s Office of Marine and Aviation Operations, has just spent about four weeks mapping more than 13,600 square miles of seafloor around the U.S. Virgin Islands and Puerto Rico. The maps show the seafloor in detail, making them useful for biologists, geologists, oceanographers and geophysicists. The expedition team also relied on these maps to determine where the ROV dives will take place.

During both its mapping and ROV expedition legs, the ship routinely collects data on seafloor depth, the makeup of the seafloor, and water temperature and chemistry.

But the facet of Okeanos Explorer expeditions that the public typically gets most excited about, Leonardi said, is its live-streamed ROV explorations. Live video from a 2013 expedition to deep-sea canyons off the northeast Atlantic coast of the U.S. garnered more than 875,000 views, he said.

“We have a lot of devoted fans who follow our explorations closely,” Leonardi said. “But with each expedition we reach new audiences who are fascinated by what we are seeing in the deep ocean. This public engagement improves science literacy and fosters an interest in the sciences among young people – perhaps leading to the next generation of ocean explorers.”

As part of the expedition, Kennedy and the two lead scientists aboard the ship will be leading a Reddit Ask Us Anything, or AUA, session on April 16, from 1:00 pm to 3:00 pm EDT. During this session, the public can pose their questions directly to the three experts, who also include Andrea Quattrini, Ph.D., a biologist with U.S. Geological Survey; and Mike Cheadle, Ph.D., a geologist with the University of Wyoming.