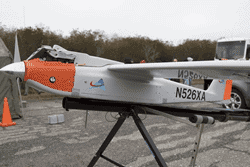 The New Jersey Institute of Technology has announced that it has conducted a flight in national airspace over the Atlantic Ocean, using an RS-16 unmanned aircraft that flew to around 3000 feet.

The flight, conducted by researchers from NJIT’s Crisis Communication Center and partners, was an historic one for the state of New Jersey. The university and its partners are the first to conduct unmanned aircraft systems (UAS) flights in the state under a Federal Aviation Administration (FAA) program to test the feasibility of safely integrating drones into national airspace and to assess the research and operational capabilities of communications and mapping sensors aboard the craft.

From a mobile emergency operations center provided by Cape May County and parked on the side of the airstrip, observers watched real-time video streaming from the drone’s tailcam as it flew over the ocean.

“We are thrilled to have conducted these flights successfully and safely with the great team we put in place,” said Michael Chumer, a research professor of information systems at NJIT and director of the Crisis Communication Center and of UAS Applied Research for the university, who is the mission’s research director. “We will now apply to the FAA to take these capabilities a step further and at some point we would like to test them during an emergency.”

NJIT’s program is designed to demonstrate UAS technology that could be deployed in response to natural or man-made disasters to assist state and federal homeland security and emergency management agencies. The university launched its first three test flights in public airspace this week from Cape May, traveling each time for about a nautical mile out over the ocean. The UAS carried several data-collecting instruments in its payload bay, including devices with mapping and communications-relay capabilities, in addition to video streaming.

NJIT researchers are seeking to deploy drone-borne weather sensors that can predict where a major storm will make landfall as many as three days before existing technology now permits. Communications-relay devices are designed to function as “flying cell towers” capable of relaying calls and data from communities in which telecommunications equipment has been knocked out. Enhanced mapping technology would give emergency responders immediate information on damage caused by major storms such as Hurricane Sandy.

“We hope to mitigate the impact of storms and other disasters on communities by gathering information in advance, collecting real-time data on how a storm is developing, for example, to more accurately predict its destructive potential and prepare for it,” Chumer said. “Because these flights are unmanned, we can do this without putting people in harm’s way.”

“This is a disruptive technology, with strong potential in the homeland-security, emergency- preparedness and communications spheres, so I expect many more useful applications to emerge,” he added.

In 2014, NJIT was the first New Jersey institution to receive a Certificate of Waiver/Authorization (COA) from the Federal Aviation Administration to conduct UAS test flights in national airspace and was the first to fly them. The Pennsylvania-based company American Aerospace, which specializes in long endurance unmanned aircraft systems flights, operated the UAS from the Cape May facility.

“American Aerospace is proud and excited to have participated in this first for the state of New Jersey with our partners at NJIT. As with the FAA, our highest priority is the safety of people – on the ground and in the air – and we are convinced that the way to most rapidly advance civil unmanned aviation is with caution, prudence, and a commitment to safety and regulatory compliance,” said David Yoel, CEO of American Aerospace, noting that “along with our experienced three-man flight crew, two fully rated pilots were used as observers, constantly scanning the skies for other air traffic and making radio calls and adjustments as needed to insure safety was never compromised.”

The real-time sharing of intelligence gathered by the UAS, including streaming video, is enabled by Mutualink, a secure interoperable communications platform that gives people on the ground the ability to see in real time what the aircraft sees in flight, providing the link between the unmanned craft and responders.

After each flight, the team assessed the drone’s operational performance as well as its success in gathering data, which NJIT shared with the FAA and emergency management agencies.

According to the FAA, unmanned aircraft presently fly in public airspace under very controlled conditions. The Department of Homeland Security, for example, conducts border and port surveillance by UAS. These vehicles are not authorized to fly in areas over major urban zones with the highest air traffic densities. The agency, charged by Congress with testing drone safety and coming up with recommendations to regulate them, developed the COA process in 2012.

Observers at the test flights included elected officials from Cape May and Cape May County, as well as economic development officials, representatives from U.S. Sen. Cory Booker’s and U.S. Rep. Frank LoBiondo’s offices, UAS experts from the FAA and emergency management agencies, as well as industry partners. Neale Messina, senior director for business development for the Products and Solutions Division of SRI International in Princeton, the former Sarnoff Corporation, was among them.

Messina said his company is collaborating with NJIT’s UAS research team and would like to evaluate its TerraSight EX software platform in UAS flights in the National Airspace System (NAS) through the NJIT COA approved by the FAA for UAS test flights at the U.S. Coast Guard Training Center in Cape May. TerraSight processes live video feeds from an unmanned aerial system and converts them into real-time, integrated information to enhance total situational awareness. Among other capabilities, it precisely drapes full-motion video over a 3D map in a single display providing live video in context in its surroundings. It assigns accurate latitude, longitude, and elevation coordinates for each video pixel.

The RS-16, with a wingspan of nearly 13 feet, is one of the first professional grade long-endurance UAS designed for civilian applications. The craft weighs 85 lbs. and can fly for 12 to 16 hours carrying up to 25 lbs. of sensors and other applications at a speed around 65 knots on just 1.5 gallons of gasoline.

“The use of drones as an experimental platform is part of NJIT’s overall plan to work with public and private sector partners to evaluate and test devices and applications for integration into technological solutions designed to improve public safety and homeland security,” said William Marshall, assistant vice president for government relations for the New Jersey Innovation Institute, an NJIT corporation. “Future experiments will look at other major areas of crisis response to include communications during an event in which normal communications and networks are not available. The drone with the proper payload can sustain and extend communications coverage in the affected area.”