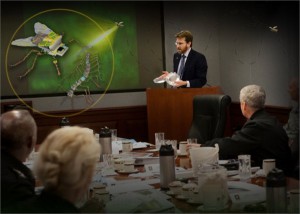 The US Army Research Laboratory (ARL) in Adelphi, Maryland, following research into the field of miniature actuators, has developed a pair of tiny robotic wings measuring only 3 to 5 centimeters in length.

The wings are made of lead zirconium titanate, referred to as PZT, a material that creates electric charge under an applied pressure or can create strain (i.e. motion) under an applied voltage or electric field. The wings bend and flap when voltage is applied to the PZT material.

“We demonstrated that we can actually create lift,” said Dr. Ron Polcawich. “So we know this structure has the potential to fly.”

Polcawich heads up the piezoelectric microelectromechanical systems, or PiezoMEMS team, at ARL. They have designed ultrasonic motors that measure only 2 to 3 millimeters in diameter.

They have also designed sets of tiny robotic legs for a millipede-like robot that simulate crawling when voltage is applied to the PZT material.

While the legs and wings are currently functional, Polcawich says it may take another 10 to 15 years of research and development to actually produce fully-functional robotic insects.

For instance, algorithms are needed to simulate how a flying insect stabilizes itself, he said. In a gust of wind a fly “doesn’t instantaneously stabilize itself,” Polcawich said. “It will tumble, tumble, and then stabilize itself.”

Creating this type of artificial intelligence or “cognitive ability” will take time, he explained. A number of different systems must be integrated in order to develop a realistic tiny robot that functions like an insect.

Harvard University’s Ron Wood is actually further along in developing a robotic fly, Polcawich said. But Harvard’s “RoboFly” is almost three times larger than the one ARL is working to develop. And the smaller a mechanical device, the more intricate are the aerodynamic problems.

Nevertheless, Polcawich says more collaboration with Wood and other academic and industrial researchers might speed up the research.

Such collaboration is the goal of a pilot program launched this year by ARL called “Open Campus.” The program aims to cut red tape and open unclassified areas of ARL to more academic and industry partners.

While micro robotics research is interesting, Polcawich said it does not enjoy the highest level of funding. In fact, he said it has the lowest level of funding among projects currently being researched by his team. Many of the team’s other projects rank higher in priority.

One of those projects involves precision microelectromechanical systems gyroscopes that are currently undergoing test and evaluation. The gyroscopes might eventually be used to aid in the navigation of missiles, munitions, or even dismounted Soldiers if GPS goes down for any reason, Polcawich said.

His team has undertaken a number of research projects dealing with position, navigation and timing, known as PNT. In some of the projects, inertial measurement units, or IMUs, report a device’s velocity and orientation using a combination of gyroscopes, accelerometers and magnetometers.

“Our focus in the IMU world is really kind of figuring out how to make things small, lightweight, low-power-consuming; ultimately for Soldier navigation and small-scale robotics.”

His PiezoMEMS team of 10 researchers are also currently focusing on developing components for:

Earlier this year, President Obama recognized Polcawich for his last five years of research and development. The Presidential Early Career Award for Science and Engineering was awarded to him.

Polcawich said he just enjoys being able to “push the state of the art” in micro fabrication.