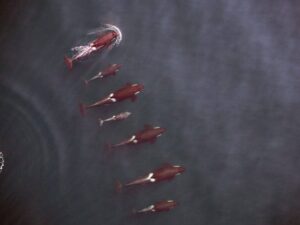 For the first time, scientists have used an unmanned aerial vehicle to study killer whales from above. The device they’re using is a remote-controlled hexacopter with a high-resolution camera mounted in its belly, and the photos it produces are beautiful and full of detail. The images offer an entirely new view of this species.

But scientists aren’t taking pictures just because they look nice. The images contain detailed information that scientists can use to monitor the health of individual killer whales and of their population as a whole.

To get these photos, scientists from NOAA Fisheries teamed up with colleagues at the Vancouver Aquarium. The animals they studied are the Northern Resident killer whales of British Columbia, a population that’s listed as threatened under Canada’s Species At Risk Act, and the pilots were trained and operating under permits issued by the Canadian Government. Like the endangered Southern Residents that spend summers near Seattle, these whales eat salmon—mainly Chinook salmon—and some of the salmon runs they rely on are much smaller than they used to be. In fact, several Chinook runs are themselves endangered, and scientists are concerned that a lack of prey may be limiting the whale populations.

The main question scientists are trying to answer is: Are the whales getting enough to eat? To find out, they fly the hexacopter at an altitude of more than 100 feet, high enough that the whales don’t notice it, but near enough to get photographs that are incredibly revealing. Scientists have previously taken aerial photographs of killer whales from a helicopter, but those photos are taken from a much higher altitude, and the cost can be prohibitive.

By analyzing the hexacopter photos, scientists can see how fat or skinny individual whales are. They can also see which whales are pregnant and what percentage of pregnancies are carried to term.

Currently, scientists do a summer census to learn out how many whales have died since the year before. “But mortality is a pretty coarse measure of how well the population is doing because the problem, if there is one, has already occurred,” said John Durban, a biologist with NOAA’s Southwest Fisheries Science Center in La Jolla, California. But the hexacopter, Durban said, “can give us a more sensitive measure that we might be able to respond to before whales die.”
Source: NOAA