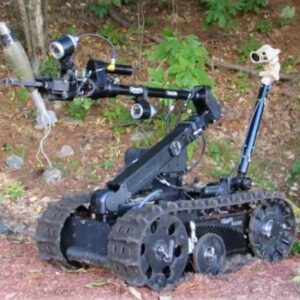 TALON V is the first and only tactical, man transportable robot that has successfully completed the U.S. Army’s TARDEC Interoperability Profile (IOP) testing. Enhanced electronics and software, and the ability to use third party components gives the robot increased performance capabilities, flexibility, and system level modularity for greater mission effectiveness.

“Throughout its history, TALON has had industry-first and industry-leading features that protect the lives of those who protect us,” said Dr. Andrew Rogers, president of QNA. “TALON V is another example of the innovation that can happen when industry listens to and responds to the needs of our country’s military.”

More than 4,000 of QNA’s TALONs are deployed globally and used for counter-improvised explosive device (CIED) missions, police operations and domestic and international hazardous material missions. To date, TALONs have participated in approximately 300,000 combat missions and have defeated over 50,000 IEDs. On average, a U.S. military TALON robot in Iraq and Afghanistan is repaired as many as 13 times from significant IED damage.