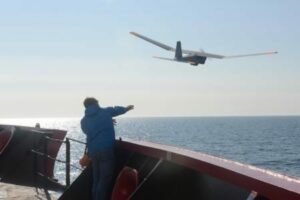 The Puma All Environment UAS is released from the deck of the Coast Guard Cutter Healy during an exercise in the Arctic Aug. 23, 2014. (Coast Guard photo by Petty Officer 1st Class Shawn Eggert)

Scientists at the Coast Guard Research and Development Center, based in New London, Connecticut, have a long history of studying UAS for their potential to improve Coast Guard operations. This summer they teamed with researchers from the National Oceanic and Atmospheric Administration (NOAA) and continued their work by deploying a Puma All Environment UAS from the Healy to support their Oil in Ice exercise and to evaluate the system’s abilities in the extreme environment of the Arctic.

“UAS technology is already used by NOAA for gathering data and collecting imagery, but this system has rarely been tested in the Arctic,” said Todd Jacobs, a NOAA representative traveling aboard the Healy. “In 2013, we launched a Puma AE from the Healy and tested its flight endurance in cold weather. This year, we developed procedures for landing the system directly onto the flight deck, something that had never before been done on a Coast Guard vessel.” 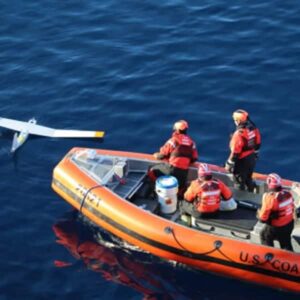 The Puma is a small UAS designed for land and maritime operations.

“The Arctic is a cold, dangerous place, and there’s always some risk any time a smallboat crew gets underway,” said Bill Jankowski, an RDC program lead traveling aboard the Healy. “Having the ability to land a UAS aboard a vessel rather than in the water is important because it means crew members don’t have to be put at unnecessary danger by going out to retrieve it.”

The successful landing of the Puma AE aboard the Healy didn’t downplay its role in the RDC’s Oil in Ice Project. Operators also used the system’s infrared and electro-optical camera to provide video of a simulated oil spill and to relay data to NOAA’s Emergency Response Management Application, a database used by the Coast Guard and its partner agencies to share information during response efforts. Ease-of-operation and versatility combined with the stealth provided by its near-silence and small size could make the Puma AE or similar UAS technologies useful tools for nearly any Coast Guard mission.

“UAS can support anything from migrant and drug interdiction operations to search and rescue, fisheries enforcement or ice recon. It’s a technology with a lot of potential to help the Coast Guard in the Arctic,” said Jankowski. “These unmanned systems are never going to replace our rescue swimmers or our boat crews, but they show a lot of promise in enhancing Coast Guard missions wherever we serve.”