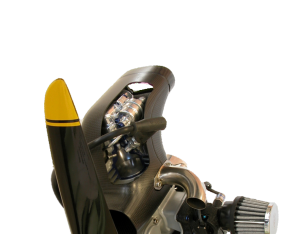 Orbital Corporation Limited (Orbital) has delivered the first purpose-built ScanEagle Unmanned Aerial Vehicle (UAV) propulsion system to Insitu Inc, a subsidiary of The Boeing Company, for in-house testing and development. Designed specifically for Small Unmanned Aircraft Systems (SUAS) class UAVs, it is the first reciprocating internal combustion propulsion system to be engineered from the ground up for unmanned aerospace application.

“Delivery of this first engine is a major milestone in the UAV propulsion engineering project,” said Mr. Terry Stinson, Orbital’s CEO and Managing Director. “Insitu is very satisfied with the program results to date, and the team is already moving forward to achieve our next target.”

“Insitu is extremely pleased with the receipt of this first propulsion system and our collaboration with Orbital Corporation in Australia,” said Mr. Ryan Hartman, Insitu’s President and CEO. “We conducted a rigorous selection process for our next generation propulsion supply partner, and this event further proves that we made the right choice.”

Orbital has been working with Insitu division of Boeing since January 2013 as part of an initial design, development and validation contract to supply UAV propulsion systems. Delivery of the first propulsion system will now allow a rigorous bench testing program to commence which will be followed by flight testing. Successful completion of the program is expected to lead to a low volume production contract to be supplied from Orbital’s facilities in Perth, and may evolve into a higher volume production business from new Orbital production facilities, which would need to be established in the United States.

The delivered propulsion system was designed and manufactured by Orbital and incorporates Orbital’s new Argon Engine Control Unit (ECU) and control system. The Argon ECU has advancements not available on other aircraft in this class, including real-time monitoring and diagnostics of all critical systems, sensor and actuator redundancy, and extensive ‘black box’ recording capability. The system also uses Orbital’s patented and unique FLEXDITM technology, which enables the highest level of performance for heavy fuel SUAS engine applications, significantly extending the range for the aircraft in flight. Insitu and Orbital have also combined technical capabilities to achieve benchmark low vibration and noise suppression. “The new propulsion system has features that are intended to drive a step change in performance and reliability in the SUAS propulsion market,” stated Mr. Stinson.

As the SUAS and Medium Altitude Long Endurance (MALE) UAV markets continue to move to heavy fuel, working with Insitu ensures Orbital is well positioned to take the lead in UAV propulsion systems. The global SUAS market alone is projected to reach $1.9B by 2020 according to the recent MarketsandMarket’s report, with increasing civil and military applications as the driving factors in this market. Sales of the overall UAV market are expected to double within the next five years. Insitu is currently the biggest in the SUAS market segment.

“Orbital has adopted an aggressive diversification and growth strategy,” said Mr. Stinson. “Building on continuing success with Insitu, this new UAV propulsion initiative has the potential to evolve into a $100 million per annum revenue business for Orbital.”