UAS Flies Beyond Visual Line of Sight in Spain 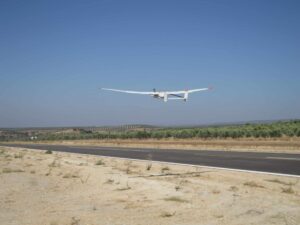 UAS Flies Beyond Visual Line of Sight in Spain

An unmanned aircraft flight beyond visual line of sight (BLOS) has been conducted a the ATLAS (Air Traffic Laboratory for Advanced Systems) test center in Spain. This is the first such flight since the new regulations on the use of aerial systems and unmanned aircraft (UAS / RPAS), approved by the Ministry of Development early last July, came into force.

The new regulations on the use of unmanned aircraft, limits civilian flights in non-segregated airspace to VLOS flights (Visual Line of Sight), where the aircraft can only get up to 500 meters away from the pilot or control center and about 400 feet above the ground. The flight conducted at ATLAS was possible as the center has its own segregated airspace, which allows UAS / RPAS flights beyond the visual line of sight.

During the flight performed at ATLAS, the unmanned aircraft flew more than 8km from the facility at an altitude of 3,300 feet above sea level. The entire operation was coordinated with the Control Center (ACC) in Seville, which manages air traffic across the southern peninsular airspace.

The flight helps to position the Spanish aerospace industry as a leader in the field of unmanned aircrafts and systems, and is a demonstration that flights can be performed in Spain with this type of aircraft legally beyond 400 feet high, opening new business and market opportunities for companies in this sector. It also allows performing tests with new technologies related to this field, such as advanced mission capabilities, large autonomous aircrafts, range of communications systems, etc.

In addition, this first BLOS flight places the ATLAS Center at the forefront in the area of research and development of new applications with UAS/RPAS, consolidating its infrastructures as internationally strategic, and as one of those destined to play an important role in the future of this emerging sector. The ATLAS centre is one of few places in Europe where flights can be performed in a 30x35Km segregated airspace, with a full civil management.

The flight was carried out by specialized pilots of the Advanced Aerospace Technology Center (CATEC) using the Viewer aircraft, which has a wingspan of 4.8 meters, a maximum takeoff weight (MTOW) of 15 Kg., and a cruising speed of 21 m/s (about 70 km./hr or 40 knots). It is an electric airplane with about 90 minutes flight autonomy, and 2.5 kg payload. To perform the test, the Viewer included a transponder to facilitate appropriate monitoring by the Center for air Traffic Control.