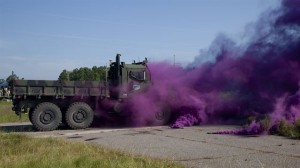 A simulated improvised explosive device is set off as a tactical convoy travels down a simulated highway during the Autonomous Mobility Applique System Joint Capability Technology Demonstration Aug. 20, 2014

“The JCTD is a joint effort between the Marine Corps and the army to come up with standardized robotic kits for their tactical wheeled vehicles,” said Bernard Theisen, the technical manager of the JCTD with the U.S. Army Tank Automotive Research, Development and Engineering Center. “Previously the Marine Corps had a program called Cargo (unmanned ground vehicle) and the army had a program called convoy active safety technologies. These two programs merged together to form AMAS.”

For more than two years, the JCTD has been working with the requirements of both services to develop a standardized kit, which has been designed to aid troops in convoy operations.

“These modes are robotic in nature because waypoint uses GPS waypoints to send a vehicle on a route and leader follower allows one vehicle be driven either manned with driver warning or driver assist or remotely in teleoperate waypoint,” said Theisen.

The event consisted of several demonstrations of the system in practical scenarios, including leader and follower, reaction to improvised explosive devices and remote control demonstrations.

“The AMAS has been set in place to improve the capabilities of the military,” said Marine Corps Staff Sgt. Maurice Mincey, a motor transport operations chief with Combat Logistics Battalion 2, Combat Logistics Regiment 2, 2nd Marine Logistics Group, II Marine Expeditionary Force. “We are performing tactical convoys and when we are in combat (the system) will increase driver awareness and alleviate driver fatigue.”

The AMAS is also designed to eliminate the need to send troops in areas where potential threats have been identified. According to the Congressional Research Service, there have been more than 2,300 U.S. improvised explosive device casualties in Afghanistan over the course of Operation Enduring Freedom, and are among the most prevalent causes for losses in U.S. forces.

“One of the goals of the AMAS JCTD is to reduce the need of having two (people) in the vehicle versus one,” said Theisen. “Potentially if you had an IED you can send a vehicle up there unmanned to see if there are additional trip wires or threats.”

The event was also used to point out deficiencies and improvements needed for the system.

“There are a lot of ways that the system can improve,” said Army 1st Lt. Robert Barnes, a soldier with 129 Combat Sustainment Support Battalion, 101st Sustainment Brigade. “Right now, it’s a commercial level system, we can improve that by looking at the broad spectrum of some of the things in a wartime environment we don’t see in commercial vehicles everyday.”

Despite the uncertainty, the Department of Defense is planning for a release date near 2020.