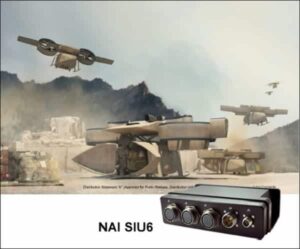 Utilizing the 64EP3 6U VME single board computer with configurable multi-function I/O, combined with the U3 PowerPC Processor, ARES’ VMC is triple redundant and controls actuators and various I/O for advanced autonomous flight control. The VMC also communicates with the AIU, which has redundancy by using two AIUs in the system.

The ARES program is an example of how NAI’s modular and adaptive Custom-On-Standard Architecture delivers SWaP-C efficient, I/O-intensive boards and systems with more processing power in less time at a lower system cost. “Our ability to mix and match functions gives customers a solution without the high costs typically associated with other vendors’ custom box designs,” explained Lino Massafra, NAI VP of Sales & Marketing. “We were able to quickly provide Lockheed Martin distributed I/O and processing solutions that met their demanding requirements, all with no NRE.”