A new flying robot is being developed to help athletes and teams elevate their performance while helping to prevent sports injuries, including concussions, cardiac incidents, and heat-related illnesses.

Borne out of a New Jersey flight academy, the AeroTrainer is an unmanned aerial video biotelemetry system designed to give athletes and teams, together with their coaches and trainers, a full picture of athletic performance and physical activity.

“While the AeroTrainer will be capable of features such as racing alongside a track runner or automatically following specific plays or players on a football field, it will also monitor heart rates, body temperatures, and the frequency and intensity of impacts to give coaches a real-time picture of their players’ physical status,” said Moses Frenck, president and CEO of Samexa Corp., which operates Mercer Flight Academy and Mercer Flight Works in central New Jersey. 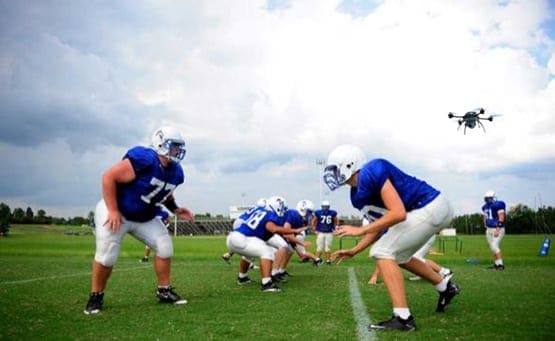 “The aviation and robotics industries are morphing at an accelerated pace. Autopilots, navigation systems, and advanced flight controls typically found in traditional aircraft are being replicated in more advanced ways in unmanned aerial systems,” Frenck added. “The AeroTrainer will bring these technologies to athletes and their trainers to enhance their training and help prevent injuries.”

The AeroTrainer is not just another passive fitness tracker that simply monitors an individual’s physical activity and displays the data. It is an active participant in an athlete’s or team’s training. The AeroTrainer flies above and around athletes, using biomechanical sensors and software to record and transmit video and any combination of physiological signals. The system combines a multi-axis camera system with unique flight controls to capture 360 degrees of video and conduct 3D movement analysis. Modeling the body as it moves helps to improve form and reduce the risk of injuries. Monitoring the body for overheating and head impacts can help save lives.

Heat illnesses, concussions, and cardiac incidents have been on the rise and are the leading causes of death and disability among U.S. high school athletes, according to the Centers for Disease Control and Prevention. The CDC reports that more than 3 million sports-related concussions occur each year in the United States, with thousands of high school athletes suffering from various forms of heat-related illnesses.

State and national guidelines are making their way into high schools, colleges, and professional sports leagues to protect athletes from these situations, which according to the CDC are mostly preventable and can be mitigated by prompt recognition. Athletes who are monitored during physical exertion have a better chance of having symptoms identified very quickly.

The company has launched a crowdfunding campaign through Indigogo to raise a portion of the funds for development and real-world testing, including donating AeroTrainers to high schools for testing and continued use.