Unmanned aircraft are being used to recover more of the oil reserves from the North Sea and beyond by studying geology from the sky. 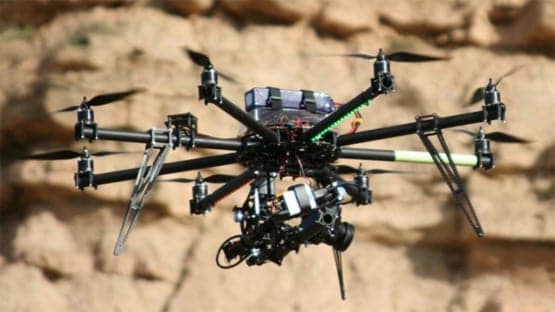 Professor John Howell, a Geoscientist at the University of Aberdeen explained: “When you drill a well in the North Sea, you can directly measure the rocks in the borehole, however you have much less certainty about what is going on away from the well. Given that two wells are often several miles apart, predicting what the rock layers in between the boreholes look like is a huge challenge.

“To solve this problem we look at similar rock units which occur in cliffs above sea level and we use the drone to make extremely detailed 3D models, which we can then adapt for the subsurface. This gives us a much better idea of what conditions are like between these two bore holes and then allows us to predict how the oil will follow and how much we can recover. The advantage of the drone is that it allows us to collect large volumes of data from otherwise inaccessible cliff sections in remote and often dangerous places.”

Geological mapping has come a long may since the early days of the Victorian pioneers who spent years making painstakingly detailed geological maps by hand. In many areas data is still being collected using conventional photographs and hand-written notes.

We use the drone to make extremely detailed 3D models, which we can then adapt for the subsurface to give a much better idea of what conditions are like between two bore holes”

The recent development of laser scanning systems, initially from the ground and later from helicopters using gyroscopic guidance systems borrowed from cruise missiles is revolutionizing mapping because it allows very large quantities of very accurate data to be collected quickly and efficiently.

Most recently the group are using unmanned aerial vehicles (drones) to map cliff sections. The drones consist of computer gyroscopically stabilised body, typically with up to eight tiny motors with helicopter-style blades on ‘spider legs’ emitting from its centre. The vehicle used in the project costs around £10,000 and is remotely operated using radio controls and carries two cameras which allow it to collect stereo, 3D imagery. The computer stabilisation and multiple motors means it is incredibly stable and provide and accurate map of the rock formations.

Professor Howell added: “The work is part of a project called SAFARI which started in the late 1980s. The original workers on the project have seen data collection technology come on in leaps and bounds since then but the introduction of laser scanning was one of the biggest improvements. We’re now able to create virtual rock formations that are accurate to within less than a few millimetres.

“The overall project’s goal is to develop a fully searchable database of these relevant rock formations which will help oil companies build better models of the subsurface and improve recovery from oilfields.”

The research work in the SAFARI project is supported by 24 oil companies including many of the major firms. The next phase, which will be the first to fully utilise the drones will start later this year.