Video: Use of 3D Printed Components on PTERA UAV 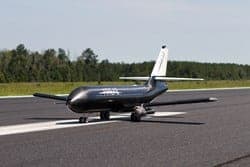 The 3D Printed components for PTERA, which stands for Prototype Technology Evaluation Research Aircraft, include fuel tank, ailerons, control surfaces and flaps and helped to reduce time and assembly work for the engineering team at Area-I.

SLS 3D Printing works via a bed of powdered nylon and a CO2 laser which sinters the nylon in consecutive layers until a final product is achieved. Originally, Area-I hand-built the ailerons for PTERA; however, “before we had Solid Concepts build the ailerons out of SLS it took us 24 man-hours,” says CEO of Area-I Nick Alley. “When we grew the ailerons with SLS, they were designed, built and assembled on PTERA within three days. SLS is easy to work with, installs quickly, is efficient and, from an aesthetic standpoint, produces parts that are gorgeous.” The control surfaces incorporated all hinges and mounting structures into the initial build, eliminating costly and time-consuming post-processing as well as eliminating the extra weight of bulky additives for attaching features via traditional methods.

PTERA’s fuel tank also benefitted from SLS, with anti-slosh baffles designed and built directly into the inside of the tank which significantly aided in the balance and flight length of PTERA. “With the latest build technologies available, we’re now able to get parts for our aircraft faster than ever before,” says Alley. Normally fuel tanks are built out of steel or other metals, but Area-I was able to 3D Print PTERA’s tank with SLS and coat the inside of the tank with a special sealant resulting in a much faster turnaround and far lighter fuel tank.

Solid Concepts conducted an exclusive interview with CEO Nick Alley at Area-I’s headquarters in Georgia. The flight of PTERA and interview with the engineers at Area-I can be viewed here: